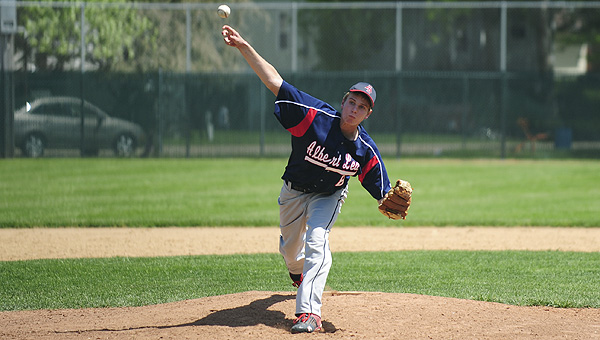 Conner Kortan went 3-for-3 with a double, and Aaron Klatt struck out three batters as the Tigers won 7-1 and advanced to Monday’s section quarterfinal against Rochester Mayo at home.

“Run support is always great,” Tigers starting pitcher Aaron Klatt said. “You can go up to the mound and don’t have to strike out anybody. It builds up your confidence, too, because if they get one or two runs you’re still up.”

Klatt held the Winhawks scoreless through the first eight outs until Zach Benson scored Brandon Beech on an infield single to third base.

The Winhawks nearly had another infield hit to third, which would of loaded the bases with two outs, when Kyle Jack hit a slow rolling grounder to J.T. Bellrichard. Bellrichard scooped up the ball and made a hard, running throw toward first which just beat the runner.

After scoring two runs in the first inning, the Tigers’ Bellrichard and Kortan led off the bottom of the second with a pair of walks.

Cory Hansen then hit a sacrifice bunt to the pitcher, advancing both runners into scoring position, before Klatt scored Bellrichard on a ground out to shortstop.

Sorenson knocked in Kortan with a single to left field, stole second base and advanced to third on a throwing error during Ethan Abben’s at bat. Abben was hit by a pitch before Makael Lunning grounded out to end the inning.

Josh Eisenbraun led off the bottom of the third with a walk and moved to second base off Cody Haaland’s sacrifice bunt.

Haaland reached first on a fielding error by the Winhawks’ first baseman, and both runners advanced into scoring position on a sacrifice bunt by Bellrichard.

Kortan blooped a single to center field to score Eisenbraun and move Haaland to third before the Tigers stole a run during the next at bat.

With Hansen at the plate, Kortan took off for second base. When catcher Jordan Romine attempted to throw out Kortan stealing, Haaland took off for home and scored without a play at the plate. Kortan was then called out at first base.

After the Tigers built a 6-0 lead through three innings, Winhawks coach Matt Smith lifted starting pitcher Bryan Rohde for Lance Jensen, who held the Tigers scoreless for the first time in the fourth inning.

In the fifth inning, Haaland scored the Tigers’ final run off a squeeze bunt by Bellrichard.

The Tigers played Rochester Mayo at 1 p.m. today at Hayek Field in the Section 1AAA quarterfinals. The Tigers swept Mayo in two games during the regular season, winning 5-1 on April 7 in Rochester and 7-2 on May 3 at Hayek Field.