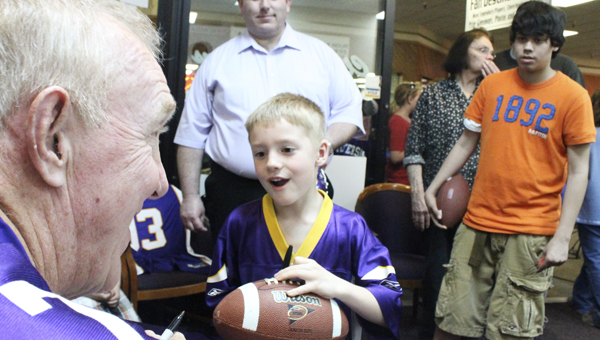 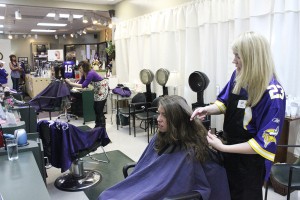 Noel Hagen explains to hairstylist Jenna Johanson how she wants her hair cut Tuesday at Classic Reflections Salon & Spa. The employees were decked out in Vikings garb on Tuesday. Even the capes were purple. -- Tim Engstrom/Albert Lea Tribune

The visit came on a day with big news for Vikings fans, with the announcement of a stadium deal. Team owners Zygi and Mark Wilf joined Ramsey County commissioners Tuesday to announce their partnership for a new stadium at the site of a former Army ammunitions plant in Arden Hills, about 10 miles northeast of downtown Minneapolis. It proposes an $884 million stadium and an additional $173 million for on-site infrastructure, parking and environmental cleanup.

Lurtsema on Tuesday called it “a done deal.”

He said the Wilfs are football fans who love the game and the fans. Lurtsema played defensive tackle for the New York Giants, and the Wilfs grew up Giants fans.

The proposal would have to get through the state Legislature and the site would require many transportation upgrades. If passed, the stadium would be expected to open in spring 2015. 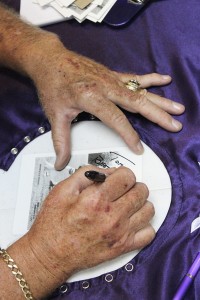 Albert Lea resident Tom Jones brought two Topps trading cards of Lurtsema when he was a Giant in 1971, before he came to the Vikings.

“Omigosh!” Lurtsema said when he saw them. “Look at that!”

The former Viking signed the cards and spoke with Jones’ kids — Spencer, 5, and Alexis, 5.

“He’s from my era,” Jones said. “I really enjoyed the Vikings in my youth, so this brings back my childhood.”

Classic Reflections owner Kari Fjeldberg said she was pleased to host the former Viking, who showed up with two Vikings cheerleaders. Another former player or two might have come, but plans changed with the stadium deal announcement.

“It’s a big things for the Vikings,” Fjeldberg said. “I am very happy we are one step closer.”

She said talk of moving the NFL franchise worried her. “Minnesota without the Vikings is like a fish without water.”

She had a photo of Lurtsema from years ago when he pulled four tickets out of his pocket and got her family into a Vikings scrimmage. She planned to ask him to sign it.