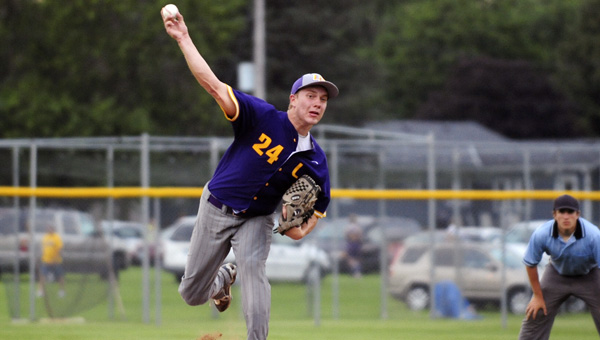 LAKE MILLS, Iowa — Starting pitcher Alex Grunhovd worked out of a first-inning jam, and Royce Byrnes hit a home run on the first pitch of the bottom of the first inning Thursday as the Lake Mills Bulldogs baseball team beat the Forest City Indians 7-6 in Lake Mills.

The first two frames were erratic for both pitchers as the two teams traded four-run innings.

After walking three of the first four Indians batter to load the bases in the top of the first, Grunhovd struck out the final two batters to hold Forest City scoreless.

Royce Byrnes then lead off the bottom of the innings with a home run to center field, and the Bulldogs unleashed a flurry of baserunners.

Josh Zabel followed Byrnes’ homer with a walk, and Drey LyBarger grounded out to the pitcher, moving Zabel to second base. Grunhovd then drew a walk, and Tyler Rice singled to left field to load the bases.

With the bases full, Bryan Hengesteg drew a 3-0 count before hitting a two-run single to left field, and Dylan Davis followed with a single to center to re-load the bases. Paul Pins reached first on a fielding error by the Indians’ shortstop, scoring Rice, before grounded into a double play to end the inning.

“In the first inning we were pretty motivated,” Bulldogs coach Jason Blaser said. “Before the game I talked about how important it is to get on top right away.”

Grunhovd struck out the first batter in the top of second to record his third straight before the wheels fell off. After walking two batters, Grunhovd allowed two singles, a walk and two more singles as the Indians drew even 4-4. Grunhovd’s final out of the second inning was the last of the game, as he was relieved by Dahle for the final five innings.

“Alex didn’t have his best stuff,” Blaser said. “It was good to see Levi come in and, for the most part, pitch pretty effectively.

With no outs and the bases loaded in the bottom of the second inning, the Bulldogs re-took the lead when Grunhovd grounded into a double play but scored Byrnes. Rice then doubled to left field to score Zabel and the Bulldogs went ahead 7-4. The Indians added one more run in the top of the sixth but couldn’t draw even.