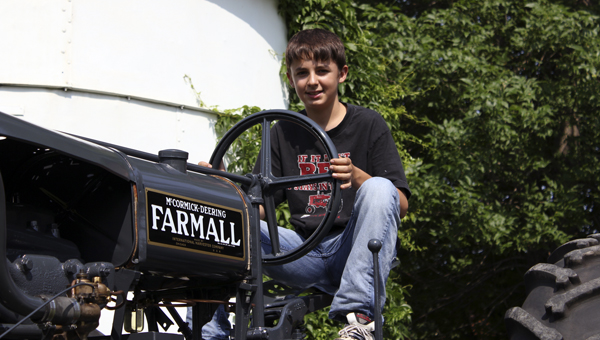 Wyatt Sailor poses for a photo on the tractor he restored. He’ll bring this tractor to the Red Power Roundup at the Freeborn County Fairgrounds. -- Garrett Wampler/Albert Lea Tribune

MANCHESTER — There is something special about the bond that fathers and their sons share.

For Wyatt Sailor the bond that he shared with his father, Colby, was cut short. His father died in 2006.

Sailor, 13, has found a way to continue to share a common bond with his father. He has a passion for restoring old tractors. This passion was ignited by the way his dad restored classic trucks.

“It inspired me because I can be like my dad,” Sailor said. “I like restoring old tractors, and it inspired me to start working on these old things.”

Sailor’s story began as a cleanup mission. He was working on a wooden box car and couldn’t find wheels for it. He was told if he tore it down he would be allowed to fix up an old tractor in the shed. The Manchester resident did just that, he tore down the car and returned the pieces to the wood pile.

The tractor turned out to be a 1940 Montgomery Wards Twin Row. The tractor, belonging to Sailor’s grandfather Pete Nielsen, had been sitting in the corner of a shed for 35 years. Originally the tractor belonged to his great-grandfather Faye Severtson, who gave the tractor to Nielson.

At the time the tractor was rusted through, and the engine was in horrible shape. Where the front tire should have been stood a truck tire, and the back wheels were completely rusted out.

“We took the header off, and some of the valves were completely rusted off,” Sailor said.

Sailor and Nielsen worked together to replace the pistons. They also mounted a starter next to the engine and attached a battery box to the tractor. Finally the duo was able to clean the carburetor out to get the Wards Twin Row to run.

“We had to take it apart at least 20 times to get it to run well,” Sailor said.

After the engine problems were resolved the team moved on to tackling the cosmetic damage. They turned to painter Rodney Heideman for help. Heideman said Wyatt did all of the preparation for the painting including doing all of the sanding.

“(My dad) was a professional painter, and he would have painted this tractor for me but he didn’t get a chance to,” Sailor said. “I didn’t start working on it until after he died.”

After a year and a half his first project was completed. He entered the Wards Twin Row into the 4-H competition at the fair and won grand champion. He then went onto the state fair and won the same award on the larger stage.

“It’s pretty good to get,” Sailor said. “There were so many other tractors there that I had to go against.”

His most recent restoration is a 1930 Farmall Regular. He bought the tractor from Jim Myer.

“This one was sitting outside, and the engine has never been stuck in this one before,” Sailor said.

The tractor is noticeably gray and not the classic red that most people are accustomed to. Wyatt explained it is because International didn’t begin painting their tractors red until 1936.

During the restoration of the classic Farmall, Sailor and Nielsen had to travel as far as Murdock to purchase a new carburetor for the machine.

His tractor features after market road gear to increase the speed of the tractor and starts on gasoline before being switched over to run on kerosene.

Sailor will take this tractor to the 22nd annual Red Power Roundup at the Freeborn County Fairgrounds Thursday through Saturday.

After the Roundup, he plans on taking the Farmall to this year’s 4-H competition at the Freeborn County Fair. If all goes well he can repeat as the grand champion and attempt the same feat at the state fair.

The boy that is still too young to drive has his eyes on a future project. His grandma’s 1982 Chevy El Camino super sport. Sailor said, “That would be a fun one to restore.”

He hopes he can turn his father’s passion and hobby into a career for himself.

“I’d like to restore tractors as a career, and old trucks and cars,” Sailor said. “That would be fun.”