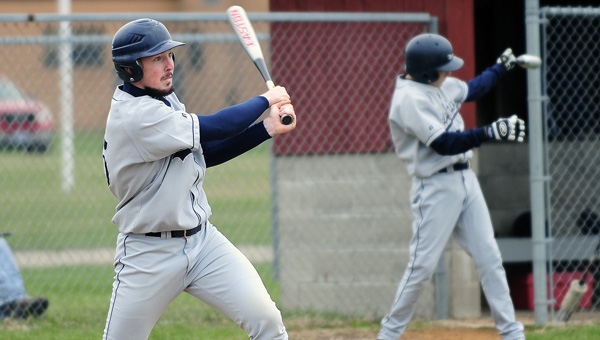 Glenville-Emmons senior Tyler Woodside watches a hit ball fly into the outfield earlier this season against Truman in Glenville. Woodside led the Wolverines in pitching and hitting, and was named Southeast All-Conference. -- Andrew Dyrdal

Five seniors, including Tyler Woodside, Spencer Kral, Peter Hansen, Landon Hall and Levi Garner, received the honor after the Wolverines first atop the Southeast Conference with a 9-1 record.

Woodside was the team’s top pitcher this season, finishing with a 7-3 record and 1.84 earned run average. Woodside struck out 84 batters and walked 24.

Woodside led the Wolverines with a .517 batting average and had a team-high 18 RBIs. Woodside struck out only twice in 58 at bats and stole 15 bases.

Spencer Kral threw three no-hitters this season as the Wolverines No. 2 pitcher and finished with a 2.68 ERA. Kral had a 6-2 record and struck out 74 batters, while walking 17.

Offensively, Kral had a .305 batting average and was second the team with 14 RBIs.

Hansen had a .317 batting average this season and a team-high five doubles. As one of the faster members of the Wolverines team, Hansen had 11 stolen bases in 12 attempts.

Hall drew 14 walks this season en route to a .517 on base percentage. He finished with seven RBIs and 11 stolen bases while owning the Wolverines’ second-highest batting average at .325.

Garner was the Wolverines’ top fielder this season, finishing with a .984 fielding percentage. Garner had 166 putouts, 22 assists and three errors.

At the plate, Garner batted .235 with five RBIs and drew a team-high 17 walks.

The No. 5-seeded Wolverines were ousted from the Section 1A West quarterfinals Tuesday by No. 4 Kenyon-Wanamingo.