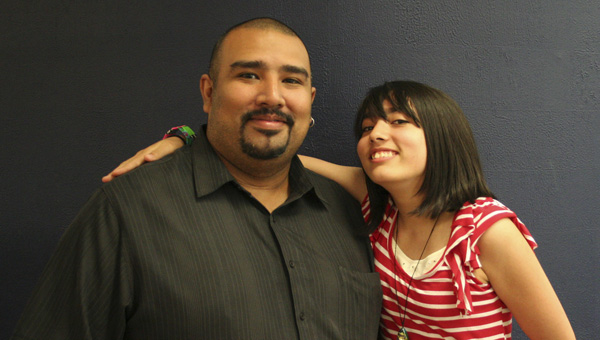 Isabelle Sanchez poses for a photo with her dad, Dale. Sanchez said her dad is the perfect father for her. -- Kelli Lageson/Albert Lea Tribune

A sixth-grader in Albert Lea won first place in an essay contest for writing what she liked most about her father.

Isabelle Sanchez, 12, entered in The National Center for Fathering and Minnesota Twins Father of the Year essay contest after her teacher, Amy Skinness, suggested her students enter. She won first place out of all the sixth-grade students in Minnesota who entered.

“I thought it’d be a good way to challenge myself,” Isabelle said.

Isabelle’s dad, Dale, said he’s proud of her for her writing skills. Dale’s mom had to work a lot to provide for their family when he was younger, so Dale said he tries to be the best dad he can be by being there for his family.

“All I want to do is be there for her,” Dale said. “Having a relationship where we can be there for each other is what’s important.”

Dale and Isabelle will attend a ceremony on June 18 at the Capitol where they’ll be recognized for Isabelle’s essay. They’ll go to the Twins game that night against the Padres.

Skinness, a sixth-grade teacher at Sibley Elementary School, said Isabelle is creative and a good student. She also said Isabelle is responsible and thinks of things in ways no one else does.

“She can have a very quirky way of saying things,” Skinness said.

“We have several really good writers in our class, but it was just something I didn’t expect,” Skinness said.

Isabelle’s essay described her relationship with her dad as a puzzle that’s not completed yet. Dale said as long as they’re working on the puzzle together he’s happy.

She also said in her essay that though he might not be considered the best dad in the entire world, he’s exactly what she needs and therefore the best dad for her. Isabelle also said she thinks Skinness is “the best teacher in the whole world,” and Dale said Skinness has inspired Isabelle in many ways.