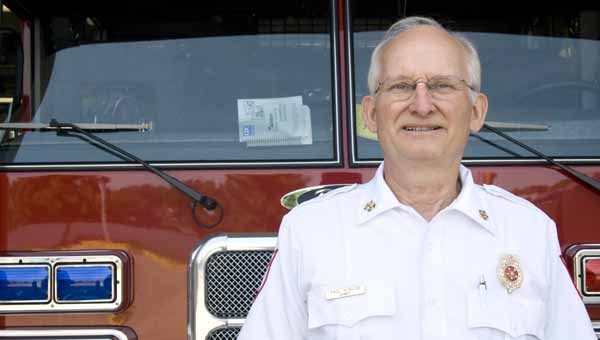 Albert Lea Fire Chief Paul Stieler will retire at the end of June after working for the city for more than 30 years. -- Sarah Stultz/Albert Lea Tribune

After more than 30 years of work with the city of Albert Lea, Albert Lea Fire Chief Paul Stieler will retire from his position on Thursday.

Albert Lea City Manager Chad Adams was expected to announce an interim fire chief Friday or today, Stieler said. This position will serve for about four months as the city manager explores potential reorganization of the department.

As of Friday afternoon an announcement had not yet been made.

Stieler, 64, said he started with the city in March of 1973 as a mechanical inspector or building inspector.

In 1988, he became the captain of the fire department, specifically the captain over fire prevention and education.

He said since he worked for the department in 1973, the firefighter shifts have gotten smaller. Instead of seven-man shifts, there are now five-man shifts.

“There’s been a lot of changes,” Stieler said.

There also used to be a fire marshal and an assistant fire chief as well.

“I’ve worked with a great bunch of people over the years,” Stieler said. “The city is fortunate to have so many really good, dedicated employees that I’ve been able to work with.”

Stieler said after he retires he hopes to do a little traveling, visit family and finish some remodeling on his house.

He said he’s not the type of person who is able to stop working all the time and just fish or play golf.

He is also planning a motorcycle trip, backpacking trip and a trip to Australia next year.

“I’ve really enjoyed working for the city, with all the people in the city,” Stieler said.

A retirement celebration will be held in Stieler’s honor from 9 to 11 a.m. Thursday at City Hall. The public is invited to attend.