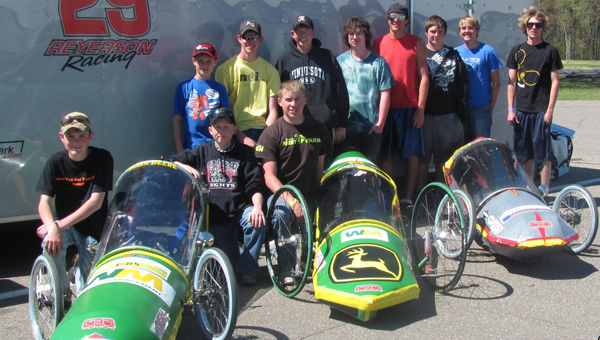 The team also won first place in that same category in 2010. Team adviser David Bosma said mileage numbers weren’t as high as usual because of colder weather. The E-85 car got 475 miles per gallon, which is low compared to Alden-Conger’s state record of 721.86.

“It was way down from what it was in Houston,” Bosma said.

Bosma and some of the students recently competed with the same cars in the Shell Eco-marathon in Houston in April. The MTEA event, however, was held May 15-17 in Brainerd.

The team did have some trouble with their cars but were able to work together to fix the problems. Bosma said he’s heard from other mentors that Alden-Conger students are more concentrated on the contest than some others who attend the event.

“Part of the program is that they have to learn how to problem solve,” Bosma said. “They stepped up to the plate and got the cars ready.”

The cars are worth anywhere from $1,500 to $2,000, so the students do lot of fundraising to be able to build their cars.

“We want to thank the community for their support,” Bosma said. “We wouldn’t have been able to build these cars and go on the trips without their help.”

The cars are made to be as light as possible, not for speed. The goal is to complete the two-lap run and get the most miles per gallon. The cars usually go about 15 mph around the track.