Memorial service will be held at 11 a.m. Wednesday at the Chaska Moravian Church, 115 E. 4th St., Chaska. Family to receive friends starting at 10 a.m. Inurnment will be at Fort Snelling National Cemetery. 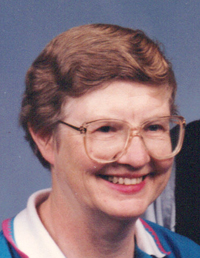 Anna was born Jan. 12, 2932, in Albert Lea, to Haakon and Alma (Thompson) Hanson, one of nine children. She was baptized and confirmed at West Freeborn Lutheran Church, and graduated from Freeborn High School. On Dec. 18, 1954, she married Meritt Henry at Centenary Methodist Church in Mankato. They had three children. She graduated from Mankato State College in June of 1954 with a bachelor’s degree in elementary education. She taught kindergarten at Two Harbors, Mankato, and Gibbon before coming to Chaska in 1964. She retired in 1989. Anna loved to teach children. She and her closest co-workers, Carol Mears, Mary Lindall, Paula Green and Mary Goodwin loved watching children cuddling baby ducks and chicks in the spring, watching monarch butterflies emerge in the fall, and shaking jars of cream to make butter.  Anna was a devout Christian, a charter member of Crown of Glory Lutheran Church, director of children’s “Glory Singers” choir she formed, and sang in the choir. She was one of the first summer youth directors at Chaska. She was a den mother for Cub Scouts and Girls Scout leader. She loved to bowl, fish, hunt, ride horses, paddle canoes and bake pies. She will be in our hearts forever.

Arrangements are with the Bertas Funeral Home of Chaska.