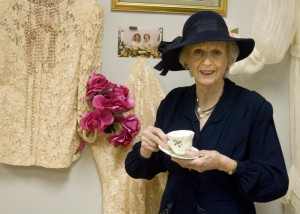 Joan Muschler, pictured here, will be one of the entertainers during the English tea event hosted by the Albert Lea Art Center on June 11. -- Sarah Stultz/Albert Lea Tribune

With the summer season under way, the Albert Lea Art Center is gearing up for a new show and event.

Titled “Vintage Fashion & Florals,” the show will begin June 9 and run through July 30. It includes wedding dresses from the 1900s through 1970s, along with watercolor and acrylic floral paintings from local artists that will be displayed in a patio effect.

Albert Lea Art Center Artistic Director Marty Shepard said about 10 people contributed dresses to the show, many of which will have photographs next to them explaining who wore the dresses and a little history behind them. There are some that both a mother and daughter have worn.

There will also be antique English furniture. 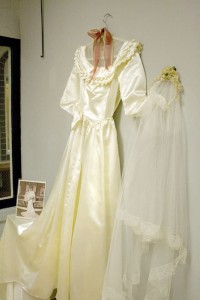 This is one of several vintage wedding dresses that will be on display during the upcoming Albert Lea Art Center show "Vintage Fashion & Florals," from June 9 through July 30.

The show will be on display at the Art Center from 10 a.m. to 2 p.m. Tuesdays through Fridays at 224 S. Broadway Ave.

A highlight of the show is slated for June 11, starting at 2 p.m., with an English tea, which will also include finger foods, entertainment and fun.

Tickets are $20 per person for this event. Seating is limited, so people are encouraged to call the Art Center at 373-5665 to get their tickets.

Shepard said men in tuxedos will greet and seat the people in attendance.

Deb Cooper will play on the keyboard before the event begins, and then after it starts, there will be music by Glen and Pat Parsons and humor by Nancy Hockenberry and Paul Cooper.

Refreshments will include cucumber sandwiches, tea, scones and lemon cookies.

“It will be a very pleasant afternoon,” Shepard said.

This will be the second time the Art Center has hosted the event, after a one-year hiatus last year.

People are encouraged to dress in costume with hats.

Shepard said it will be a good event for mothers and daughters or grandmothers and granddaughters.