As good as advertised? 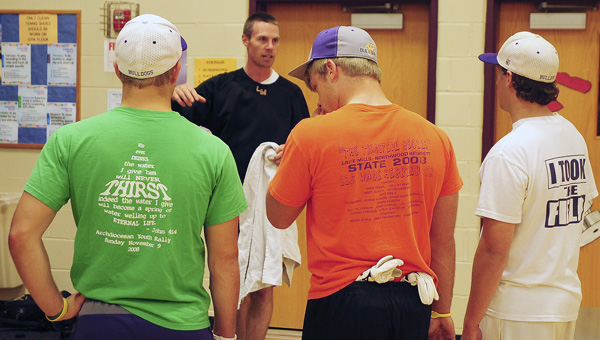 It was a welcoming sight for Bulldogs coach Jason Blaser, whose team was ranked No. 5 in Iowa’s preseason poll, but he knows they haven’t proved anything yet.

“We talked a little bit before our first game about how they should feel proud,” the seven-year head coach said. “It’s a reward for how hard they worked last year and the success they had, but we knew it wasn’t going to win us any ball games.”

Last season, the Bulldogs won a school-record 24 games. The team was district champs and finished second in the North Iowa Conference before finishing one strike away from a state tournament berth.

The Bulldogs lost to St. Edmond on July 20, 2010 in Belmond, Iowa, on the final pitch of the game. Anthony Flattery hit a bases-loaded single with two outs off an 0-2 count in the bottom of the seventh to score the game-winning run.

Blaser said after the game it would “take several months to get over this loss.”

“It’s something that I think about every single day,” Blaser said. “Being a coach, I think you always remember the negatives more than the positives.”

Blaser said he continually asks himself what he could have done differently that game as a coach but ultimately it can’t change anything.

“It helps now that we’re into the season,” he said. “We have new things to focus on, and it’s not on the forefront like it was the whole offseason.”

Throne was a dominant pitcher capable of carrying the Bulldogs to victory. On July 11, 2010, Throne no-hit Central Springs, one of Iowa’s top teams, in the district playoffs. He also batted over .500 and had multiple home runs.

“Every time you lose an All-State player, let alone a pitcher, that’s tough to come back from,” Blaser said. “Last year the guys had confidence in Chris, and they knew when he was on the mound that we were going to win the game. This year I think we’re still confident but going to have to do things a lot differently.”

Blaser said the Bulldogs need to score more runs and play better defense than they got away with last year.

The Bulldogs not only lost their No. 1 pitcher to graduation, but their No. 2 pitcher, too.

Drey LyBarger had surgery on his right rotator cuff this December after injuring it during a winter baseball tournament. LyBarger, who was an All-District and All-Conference pitcher and catcher last season, has been limited to first base this season because of lack of arm strength.

LyBarger said he’s about 40 percent healthy enough to pitch, and the he hopes to return to the mound before the postseason. Bryan Hengesteg has taken his place behind the plate.

With LyBarger out, the Bulldogs will rely on Alex Grunvhod and Levi Dahle to hold down the starting pitching rotation. Josh Zabel and Tyler Rice will pitch in non-conference games.

“I think our 1-2 guys, for the most part, aren’t going to overpower you,” Blaser said. “But last year both guys pitched some big ball games for us and pitched very effectively.

“I know they have the ability, too, it’s just a matter of getting their arms conditioned and gaining the confidence they had last year.”

Blaser expects the Bulldogs to compete for a North Iowa Conference championship, and said the team has good shot at making the state tournament.

“I think our offense will be really strong again,” Blaser said. “The nice thing about having eight of nine starters back is they’ve seen a lot of pitching in their years on varsity.

“We’re going to be able to score runs, and offensively we’ll be able to compete. It depends if our pitching is on and we’re able to make the routine plays that we have to make.”

Besides offensive production, Blaser said the Bulldogs’ strengths are baserunning, two-strike hitting and experience. He said the team’s weakness will be staying healthy.

“Getting LyBarger back, if that happens, will be a blessing,” Blaser said. “If not, the other four (pitchers) have to step up.”

The Bulldogs are 3-1 this season and have scored 45 runs in four games. The team has a batting average of .373 but a 5.78 earned run average.

When asked if the Bulldogs are the fifth best team in the state, Blaser said “far from it.”

“We have to prove we’re the fifth best team in the state. Can we get there? Sure. But we can’t let it get to our head. Any team can win on any given night whether you’re ranked No. 5 or 25. You’ve got to be ready to play.”