Audrey Angeline LaRue, 92, formerly of Wells, died Saturday, June 4, 2011, at St. John’s Lutheran Home in Albert Lea. Memorial services will be held at 2 p.m. Wednesday at Good Shepherd Lutheran Church in Wells with a visitation beginning one hour prior to the service at the church. The Rev. Kathy Fullarton will officiate and burial will take place in Rosehill Cemetery, Wells, Faribault County. 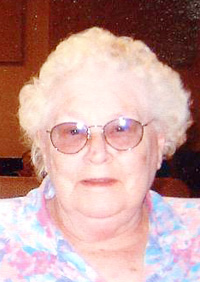 Audrey was born May 29, 1919, the daughter of Louis and Agnes (Mucha) Mortenson. On July 7, 1944, she was united in marriage to Barney Ervin LaRue in Albert Lea. To this union, two children were born. Audrey loved to work in her garden and to go dancing. She enjoyed crocheting and took first and second place at the Freeborn County Fair in recent years for some of her work. She was an excellent homemaker who loved her family and was always trying to help others.