Memorial services for Cecelia M. Peterson, 98, of Albert Lea will be held at 2 p.m. today at Assembly of God. The Rev. Lee Freshour will officiate. Interment will be at Hillcrest Cemetery. Visitation will be one hour prior to the service at the church. To sign the guest book, go to www.bayviewfuneral.com. 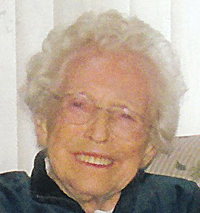 Cecelia went to be with the Lord peacefully on Thursday, June 9, 2011, at St. John’s Lutheran Home surrounded by the love of her family and caring staff.

Cecelia M. Peterson was born on July 26, 1912, to Johann and Monika (Shasser) Maier in Mühlau Kreis Miesbach, Germany. When she was 2 years old the family moved to the United States. The family lived with other German immigrants for a year and then built a log cabin in the woods in Mizpah. When she was 17 years old Cecelia came to Albert Lea and lived with her sister and brother-in-law. She worked at the county home now the Good Samaritan Center. On Sept. 9, 1935, Cecelia was united in marriage to Ruben Peterson in Northwood, Iowa. The couple made their home in Albert Lea where Ruben was an Albert Lea fireman. In 1966, after Ruben’s retirement from the fire department the couple moved to Big Fork, in northern Minnesota where Cecelia enjoyed gardening, especially flowers, and feeding the birds. The Petersons lived there for about 25 years before returning to Albert Lea. Cecelia was a member of Assembly of God. She was also a member of the Eagles Auxiliary early in life. She loved sewing and cooking and was known for her ice box cookies and gingersnaps. Cecelia enjoyed being around teenagers and young people that kept her young at heart. She was very proud of her German heritage. Cecelia was a devoted wife, mother and grandmother who loved the Lord. She drew her strength daily from the Lord and his word and we know that we will see her again in heaven. I John 5:11-13.

Cecelia was preceded in death by her parents; husband, Ruben; four brothers and three sisters.