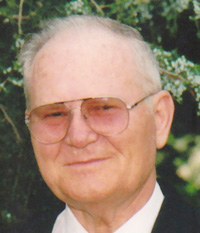 Born in Humbolt, Iowa, on Dec. 18, 1913, Charles Samuel Joshua was “S. J.” until his graduation from Rolfe High school, Rolfe, Iowa. While in high school he excelled in football, basketball, glee club and theater and later attended Iowa State Teachers’ College on a football scholarship. He graduated from Iowa State College in vocational agriculture education in 1937, and from 1938-40, he taught high school agriculture in Stuart, Iowa, which led him to Roseau for three years as a Farm Credit representative. In 1942 he met Esther Bennes on a blind date at a dance, and after marrying in 1943, they danced together for 62 years until her death in 2005. During World War II, Capt. Shelgren served four years in Company “H” in the 264th Infantry Regiment of the 66th (Panther) Division, fighting in northern France and the Battle of the Bulge, receiving a Bronze Star. Following the war, Chuck was the director of the Veterans’ Ag Dept. in Thief River Falls and farmed for one year in Jordan. In 1951 he was appointed as an agricultural extension representative of the Freeborn National Bank in Albert Lea and in 1957, promoted to assistant vice president. While in Albert Lea, Chuck was a member of several service organizations, and he often was called upon to be a master of ceremonies or guest speaker who spoke with enthusiasm, directness and humor. He began jogging in 1954, running two miles/day well into his 70s. In 1959, Chuck became president of the State Bank of Freeborn in Freeborn and presided for 12 years until his retirement in 1972. He and Esther spent many summers enjoying and renovating various lake cabins on Deer and Fish Lake in Wisconsin and Lakes Bemidji, Ada and Birch in Minnesota. For 25 years, they were “snowbirds” in Phoenix, Ariz., then lived two years in Winona before returning once again in 1996 to Albert Lea, calling ThorneCrest Retirement Community their final home.

Over the years, he was known by many names: “Charley,” “Chas,” “Chuck,” and/or “Charles.” He may be best known, however, as the creator of “Chuck-isms,” original, colorful expressions or anecdotes describing life’s pains, pleasures, stupidities and oddities, usually pertaining to common sense or agriculture. An avid reader, Chuck found joy in telling good stories, laughing, eating good food (especially sunny-side eggs), quaffing scotch and water, dancing, playing golf, watching sports and singing along to music (especially “Carolina Moon” and “Just a Little Lovin.”)

Preceding him in death were his parents, Herbert and Clessa; wife, Esther; brothers: Melvin and Leo.

Chuck lived a long, colorful life, leaving a grateful family with rich memories, wisdom and stories to tell and re-tell for years to come. As he wished, there will be no formal services. Interment will be at the Arlington National Cemetery at a later date. To sign the guest book, go to www.bayviewfuneral.com.

His family asks that you fondly remember him, knowing that “Just a Little Lovin” did, indeed, go a long, long way.

Memorials preferred to Crossroads Community Hospice or a hospice of the donor’s choosing.