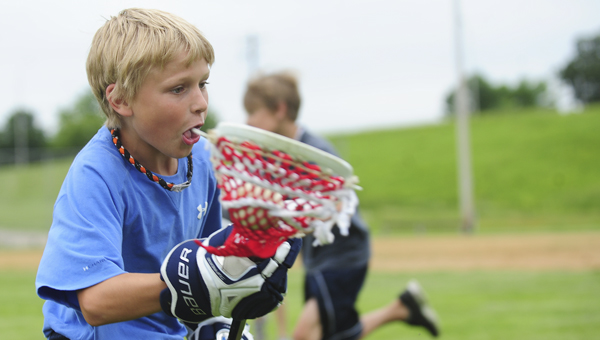 Many of the young athletes in Albert Lea Parks and Recreation’s new youth lacrosse program are hockey players, making learning the sport easy and a lot of fun. 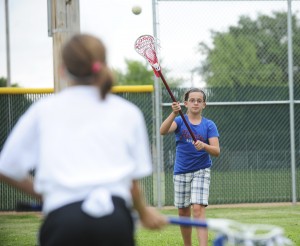 On Monday night at Hayek Park, 17 boys and girls strapped on hockey gloves and helmets, and grabbed sticks provided by the city, to perform drills and eventually scrimmage. In its third week, lacrosse practice was slated to run from 5:30 to 7 p.m., but the kids couldn’t get enough.

“They love it,” program coordinator Ed Pomerson said. “When it’s time to go they ask ‘No, can’t we keep playing?’”

The number of the program’s participants has grown from week to week. During the inaugural practice, only four showed up to try their hand at the a new sport. The next week 12 and then 17. Pomerson said while the sport is new to most of the kids, they act as if they’ve been playing it for years because of their hockey background.

“A lot of skills and techniques are similar,” Pomerson said. “There are the same concepts like stick handling and hand-eye coordination.”

Pomerson, who coaches 12-year-old girls’ hockey, said he catches kids executing plays — like a give-and-go — that they’re taught on the ice.

Of course, not all the participants are hockey players. 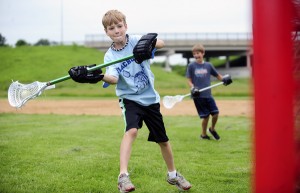 This isn’t the first time Pomerson has tried to get local kids interested in lacrosse. He said he had 40 kids signed up for a lacrosse camp at City Arena in 2007 but interest faded over time, mainly because the kids played other sports, too.

“As soon as spring hit with baseball and other sports, it kind of died off,” Pomerson said. “But this group seems like they’re really enjoying it and they’re going to stick with it.”

Pomerson said he, along with other parents, are teaching the kids scooping and cradling the ball, and passing, and on Monday, he introduced faceoffs and rules.

As interest continues to grow, Pomerson hopes to add another night of practice and to rotate to other parks like Lakeview and Hawthorne, to increase their presence in the public eye.

The lacrosse program is scheduled to run until July 18, but Pomerson said he would gladly continue the program through the summer. Those interested in joining can still register at the Parks and Recreation office at City Arena.