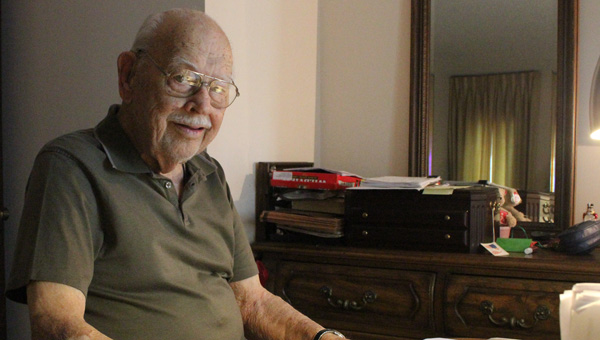 M.T. Morrison poses for a photo in one of his home offices. Morrison enjoys emailing his family members to keep in touch with his children, grandchildren and great-grandchildren who live out of state. -- Kelli Lageson/Albert Lea Tribune

If you met Meredith Trow Morrison, you wouldn’t know the man is computer-savvy.

The home of this lifelong Albert Lea residents bears multiple attributes to the past. Red shag carpet lines the floors and his bookshelves are full of a centuries worth of knowledge. 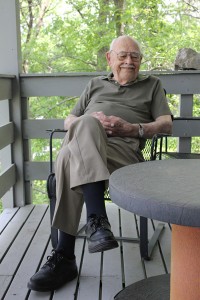 But there, in his bedroom, on his desk is a Dell Inspiron 17 laptop computer functioning off of Windows XP software.

“My grandson in Boston bought one for me and that was 15 years ago. I’ve had a couple of guys come in and give me the basics, or I’d probably just Google it,” Morrison said.

“I like to use it to take care of my finances and check my email from my kids and grandchildren,” Morrison added.

Albert Lea Mayor Vern Rasmussen said the Albert Lea City Council plans to present him with a certificate of recognition. Gov. Mark Dayton sent him a happy 100th birthday letter, too. And he has friends and family coming to visit. Generally, people call him by his first initials, M.T.

With living for so long, you must have something to do, right?

“I keep busy most of the time,” Morrison said with a chuckle.

He enjoys taking his tram car down to his dock. He takes his boat out on the lake a couple of times a week to go fishing.

When he’s not outside, Morrison watches the baseball games on TV. He jokes that he has been a Twins fan up until this year.

“Isn’t that terrible? I’d hate to be in Gardy’s shoes now,” Morrison said.

During his early years, Morrison graduated from Albert Lea High School in 1929 before attending the University of Minnesota for two years for general studies. He was there until he was drafted.

He didn’t spend his century of life alone as he married June Peterson, of Clarks Grove, in 1932. She passed away in 2001. They had three boys together, John, Mike and Toby.

Morrison has family spread out all over the United States from the reaches of Boston and Las Vegas to Coral Gables, Fla. His family includes seven grandchildren and 17 great-grandchildren.

Morrison also has two brothers living in Albert Lea. One is 92 years old; the other is 88 years old.

The business career of this small town man included selling newspapers for the Tribune, selling school supplies before he became the manager of a small loan company.

His experience doesn’t end there. He has also sold real estate and built houses.

According to a Congressional Research Service report, males born in 1911 have an average life expectancy of 49.9 years.

Morrison has survived long past that.

His secrets for living a century?

“Good genes, I guess,” Morrison said. “I haven’t done anything unusual to get there. Just lucky, that’s all.”