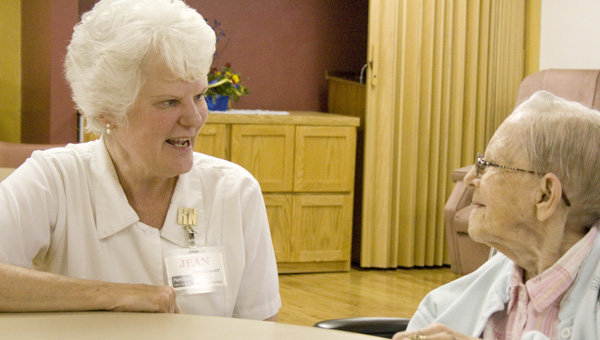 Jean Steinhauer, director of nursing at Parkview Care Center in Wells, stops to chat for a few minutes with a resident before carrying on with her duties. Steinhauer is retiring June 17 after more than 30 years. -- Sarah Stultz/Albert Lea Tribune

WELLS — When Jean Steinhauer of Wells was 4 years old, she had her tonsils removed.

She can’t explain why, but from that day forward, she decided she wanted to be a nurse.

Over the years, Steinhauer, now 64, followed that dream, going to nurse’s training at Naeve Hospital in 1966, becoming a licensed nurse and a charge nurse, and at other times performing additional duties. In 1986, she became the director of nursing at Parkview Care Center in Wells. 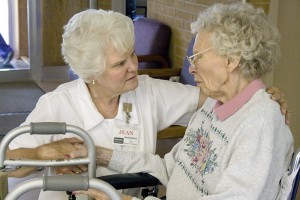 Jean Steinhauer, director of nursing at Parkview Care Center in Wells, stops for a moment in the hall Thursday to talk to a resident. -- Sarah Stultz/Albert Lea Tribune

“I love the interaction with the residents,” Steinhauer said.

Now, after 36 1/2 years in the nursing field, she will retire on June 17, closing the chapter on this stage in her life.

“She’s just been awesome,” said Deb Caldwell, assistant administrator at the nursing home. “The staff truly respect her. She’s been a wonderful mentor for everybody here.”

In 2009, Steinhauer was named as Minnesota Nursing Director of the Year, a recognition she calls one of the highlights of her career.

“I’ve enjoyed the challenge of the director of nursing position,” Steinhauer said. “It’s been rewarding to interact with the residents.”

She noted that some of the challenges of her job have been keeping up with new regulations. As soon as she hears something new is coming, she tries to educate herself on it.

But it’s helping the residents and receiving support from the staff that had made it all worthwhile.

Steinhauer, an optimistic woman, said she appreciates this support she’s received over the years.

She noted there have been several residents who have told her they will miss her, too, when she retires, but Steinhauer has told them she will be back — and this time she will have more time to sit and visit.

After she retires, Steinhauer said she hopes to have more time to spend with her grandchildren and for gardening.

She and her husband, Larry, also love to fish and have a cabin.