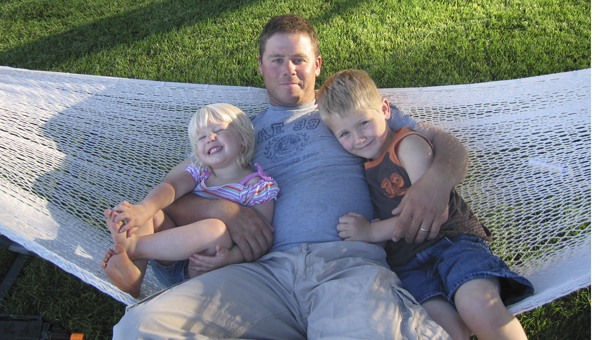 Abby Beaty, 3, and Alex Beaty, 6, laying with their father Steve Beaty in a hammock. -- Submitted

On Jan. 14 a ladder accident put the Beaty family into pieces. A benefit dinner will be held at the Emmons Legion Hall on June 25 for the family.

It only takes an instant to jumble a picture-perfect puzzle into a million pieces. Putting the puzzle back together is the long and enduring portion, even then it can be hard to tell if it is exactly as it was before. 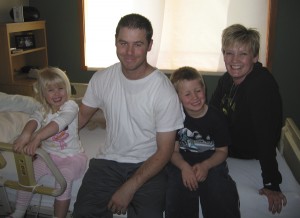 The Beaty family, from left to right, Abby, Steve, Alex and Jaci. -- Submitted

Steve Beaty, a resident of Northwood, Iowa, was working for Larson Contracting in Garner, Iowa, at a water treatment facility when the accident happened.

Details of the accident are unclear, but it is believed that when Steve descended the ladder at the facility it slipped, causing Steve to either fall or bail off of the ladder.

He fell from an estimated distance of 15 to 22 feet.

Steve was wearing a hard hat at the time, but it was thought to be dislodged during the fall. Steve landed on his head on concrete and ice.

Jaci, Steve’s wife, received the devastating news through a phone call that nobody wants to make or ever receive.

“Larson Contracting called me at work to tell me he fell of a ladder, that he was unconscious and that they would be taking him to Mercy Medical Center in Mason City,” Jaci said. “I called my mom, and she drove me. I had no idea how serious it was.”

Steve sustained multiple injuries including a burst fracture in the lumbar region of his back, a fracture to his sacrum (tail bone), two skull fractures and a recently discovered broken scaphoid bone in his wrist. 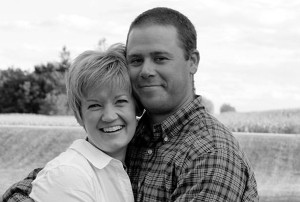 “When the doctor came in and told us he didn’t know if he would even make it through the night — it’s kind of shocking,” she said, fighting through the tears.

Not only did Steve make it through the night but also he is now continuing to recover at the On With Life facility in Ankeny, Iowa. On With Life specializes in brain injury rehabilitation.

Jaci, who works in the Assessors’ Office at the Freeborn County Courthouse, said that Steve is physically doing well based on the injuries that he suffered. There wasn’t any damage to his internal organs, but his brain function is where there is still work to be done.

“He knows everybody and his long-term memory is good. He knows all the vacations he took as a kid up to our wedding and the kids,” Jaci said. “It’s the short-term memory that is a problem for him.”

Jaci said Steve gets agitated sometimes after being reminded to do things like showering and shaving because he’s an independent person.

The center’s original prognosis was that Steve would only be under their care for 15 to 45 days, and that prognosis was on Feb. 10. They still have not set a date for when they think he will return home.

Even without a date there are still plenty of reasons to be hopeful.

Pictures of family and friends surround Steve in his room, his children Alex, 6, and Abby, 3.

Jaci brings in pictures of the house, lawn mower and four-wheeler. She doesn’t know if this helps or if it makes Steve more anxious.

“They tell me that there is every reason to be hopeful (for a return to normal), some days are worse then others,” Jaci said. “I try and think of the long term and stay positive and I keep telling him while he’s down there that this is a short time in our life, we have many years left together.”

For Jaci, normal is a return to the person she describes as a “great husband and father, who spent tons of time with the kids — they were his priority.”

Whether it is attending wrestling practice with Alex or making sure Abby was daddy’s little girl, all he wanted was for them to feel loved.

One bright spot for the Beaty family has been their employers.

“Larson Contracting and Justin Peterson, the new owner, has treated us very well and the people that are on (Steve’s) crew check in with him all the time,” Jaci added. “They’ve really been wonderful. Ryan, my boss, and others in the Assessors’ Office have been wonderful as well.”

The benefit will be on Saturday, June 25, at the Emmons Legion Hall from 4 to 8 p.m. A pulled-pork dinner will be on the menu with donations accepted. A live auction, silent auction, bake sale and music will also surround the event.

“It is being put on by friends and co-workers,” Jaci said. “I had a hard time saying it was OK and letting people help that way. I’m hoping that we won’t need the money, and we can put it to better use somewhere else.”

If people wish to donate or have any questions call, 507-271-3968. An account has been set up at the Security Bank locations in Albert Lea and Emmons to accept donations.