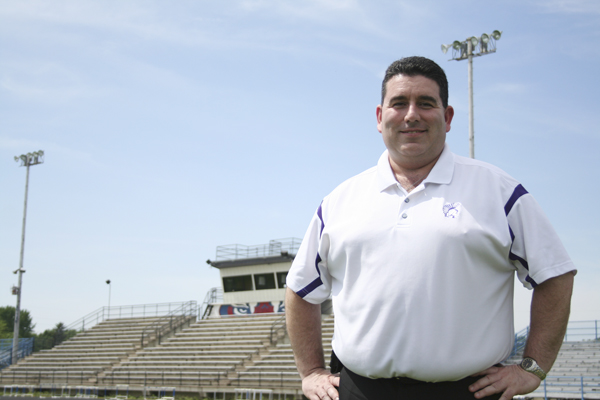 One year ago John Double interviewed for the assistant principal position at Albert Lea High School.

He couldn’t figure out why such a large school was interested in him.

The same large school that hired him to that position, prior to the 2010-11 school year, has named him the activities director.

The new responsibilities are in addition to his current duties.

“It will basically give me the duties of the activities director, which were here before,” Double said. “In addition, I will keep some of the administrative responsibilities of the assistant principal, things such as master scheduling, staff evaluation, suspensions and discipline.”

Double is confident that he can handle the added work.

Principal Alan Root and the rest of the administration will make pulling this double duty possible.

“Principal Root has been absolutely terrific about working so that we can balance a lot of these things out,” Double said. ���When we looked at our administrative job duties we looked at how we balanced them as a whole puzzle and not just as that piece.”

Some responsibilities associated with the activities director position will be moved off to another administrator.

Double will replace Clay Anderson, who accepted a position in April at Benton Community High School in Van Horne, Iowa.

“I hope to keep our athletics program on the great line that Clay has already put it,” Double said. “And to help it move forward as well.”

According to Double, Anderson did a terrific job in the ways that he handled the coaching staff and different situations with the Tigers Athletic Department to get them to the standard that they are at today.

“He has left some very big shoes to fill,” Double said. “One thing I learned a long time ago is that it is not about filling the shoes. It is about starting stuff and seeing if I can walk long enough to make them as big as his are now.”

Double hasn’t seen very many problems in the athletics, but there is two things he would like to target during his tenure.

“I’d like to see what we could possibly do to increase the attendance at our events in support of our athletes,” Double added.

The other idea centers around the former eighth graders moving into the high school next year.

“Not so much having the eighth grade playing varsity sports, but show them that they are there,” Double said. “Not losing them in the transfer over from Southwest to the high school.”

Double began his career in athletics as an athlete, participating as a swimmer, a football player, in track and tennis.

Prior to his positions at Albert Lea, Double was the principle at BOLD High School from 2006 to 2010. He was also an instructor in driver education.

He graduated from the University of Minnesota — Duluth with a double major in physical education and health education. He most recently completed his master’s degree in educational leadership from Winona State University in 2009.

Age: 41
Residence: 1428 Martin Rd.
Livelihood: activities director and assistant principal at ALHS
Interesting Fact: Double use to be an EMT.