Funeral services for Edgar Otto Ahnemann, 81, of Albert Lea will be held at 11 a.m. Friday at Redeemer Lutheran Church. The Rev. Greg Ofsdahl will officiate. Interment will be at the Rice Lake Cemetery with Military Honors accorded by the Alden area veterans. Visitation will be from 5 to 7 p.m. Thursday at Bayview/Freeborn Funeral Home and one hour prior to the service at the church. To sign the guest book, go to www.bayviewfuneral.com. 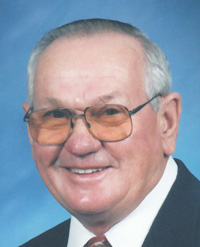 Edgar Otto Ahnemann was born on Sept. 1, 1929, to Otto and Orvesta (Scherb) Ahnemann in Faribault County. Edgar grew up in rural Alden area and graduated from Alden High School in 1947. He served in the United States Army for two years as a mess sergeant and graduated with honors from the Army cooking school. On Dec. 4, 1951, he was united in marriage to Marian Yonkey at Rice Lake Methodist Church. Edgar spent his years farming and was active in the Alden FHA, served on the Alden Township Committee and the Alden school board for nine years. He was a charter member of the Alden Lion’s Club and a leader of the Conger 4-H. Edgar was an active member in Redeemer Lutheran Church and United Lutheran Church. He taught Sunday school and was an advisor to the Luther League and served as President of United Lutheran Church Council. He was also a member of the Masonic Lodge. Edgar and Marian had also opened their home to two foreign exchange students, Ismo and Jouko. Edgar loved Canadian fishing trips and wintering in Arizona for the past 30 years. He also was fortunate to have taken two trips to Europe, one of which was a visit to his grandmother’s home town and the wedding of Ismo and Ritva in Finland. Edgar enjoyed grilling, fishing and golfing, but his greatest joy was the time spent with his grandchildren and great-grandchildren. Blessed be his memory.

Edgar was preceded in death by his parents, Otto and Orvesta; mother and father-in-law, Major and Esther Yonkey; and sister-in-law, Daryl Ahnemann.

Memorials are preferred to Crossroads Community Hospice or Youth for Christ.