Edna Mildred Anderson, 84, of Bricleyn, died unexpectedly Tuesday, May 31, 2011, at her home in Bricelyn. Funeral services will be held at 3 p.m. Saturday at Bethany Lutheran Church, rural Frost. Visitation will be Friday, June 3, 2011, from 4 to 8 p.m. at Bruss-Heitner Funeral Home in Bricelyn, and will continue one hour prior to the service at the church on Saturday. The Rev. Luther Peterson will officiate and burial will be in Fort Snelling National Cemetery in Minneapolis at 10:30 a.m. Monday. In Lieu of flowers, memorials are preferred to United Hands Hospice of Blue Earth, InterFaith Care Givers or Bethany Lutheran Church. 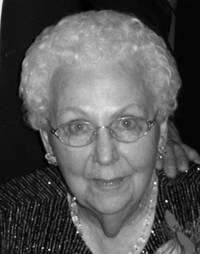 Edna was born June 18, 1926, on the family farm in Walters, the daughter of Emil and Mildred (Husby) Twedt. Edna graduated from Frost High School in 1944. Edna was united in marriage to Marvin LaMar Anderson on Dec. 1, 1951, at Bethany Lutheran Church where she was a lifelong member. She was involved with many church activities. Edna possessed a strong work ethic, was an accomplished cook and loved to bake and share goodies, especially Kringla and Krumkaka. In addition to her active role in the family farm activities, Edna was a Tupperware dealer for over 20 years. She loved her family dearly and was delighted to spend time with them. Gardening, writing letters and keeping in touch were among her top priorities.

She is preceded in death by her parents and husband, LaMar, in 2003.