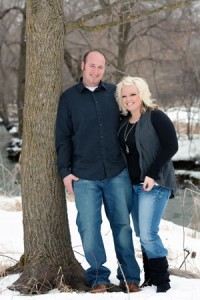 Kara is a 2006 graduate of Glenville-Emmons High School. She graduated in 2011 from the Minnesota School of Business in Rochester with a bachelor’s degree in business management with an emphasis in human resource management. Kara is employed at Taylor Corp. in North Mankato.

Paul is a 2002 graduate of Minnesota Valley Lutheran High School in New Ulm. He graduated in 2004 from South Central College in North Mankato with an associate’s degree is carpentry. He is the owner of DreamCraft homes based out of Mankato.

Parents of the groom are Julie Ibberson of Sleepy Eye and Jerry and Karen Ibberson of Ellendale.