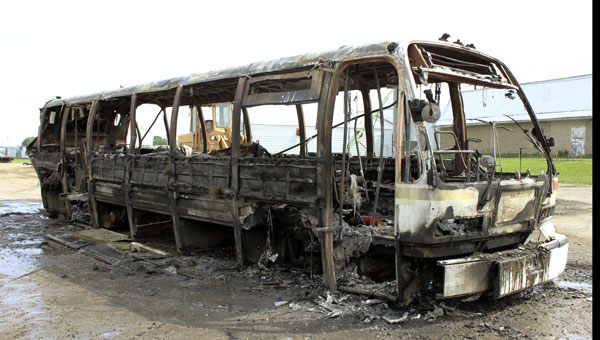 The bus that was caught on fire when a seat ignited while torching the bus. -- Garrett Wampler/Albert Lea Tribune 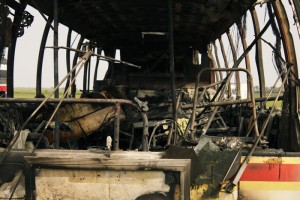 The inside of the bus that caught on fire while being salvaged around 9:20 on Tuesday morning. -- Garrett Wampler/Albert Lea Tribune

HOLLANDALE — An old touring bus caught on fire at a salvage yard Tuesday morning in Hollandale.

Dispatchers originally called in three fire departments at about 9:20 a.m. for what was believed to be a structure fire, but it turned out to be a bus. Jones Auto in Hollandale operates a salvage yard of used buses, and an employee who works there was cutting the side of a bus with a torch.

He said he inadvertently caught a seat on fire, which resulted in flames engulfing the bus.

By the time the volunteer Hollandale Fire Department arrived, the fire was out. The worker had extinguished the fire by filling up the bucket of a front end loader with water and dumping it on the burning bus.

Most of the salvageable pieces of the bus were already removed at the time of the blaze. Jones Auto is located at 119 Park Ave. W in Hollandale.