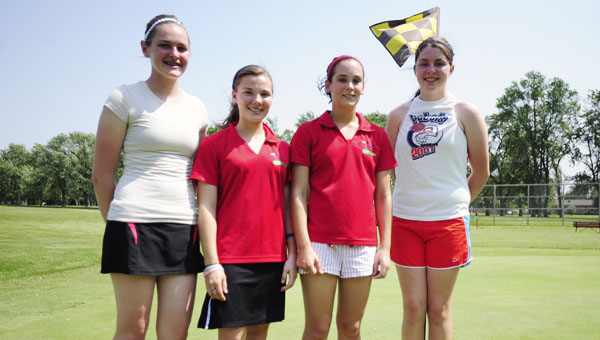 The United South Central girls’ golf team, four of whom are pictured above, along with boys’ golfer Sam Gacksetter, begin Round 1 today of the Class A state golf tournament at Pebble Creek Golf Club in Becker. From left, Veronica Schindler, Ali Wood, Erinn Hotzler and Claire Christian. Not pictured are Jenna Stevermer and Kyley Bullerman. -- Andrew Dyrdal/Albert Lea Tribune

WELLS — As the United South Central girls’ golf team returns to the Class A state tournament today, they again do so with a male counterpart.

Senior Sam Gackstetter will complete the USC state team for his second consecutive trip to the big dance.

Gackstetter shot an 80 during the Section 2A Tournament at North Links Golf Course in North Mankato. His score was good for second overall in the boys’ tournament standings.

The Rebels’ lone male competitor will look to his intangible assets to make his mark on the state tournament standings.

Last year, Gackstetter settled for 20th during his championship trip a mere 10 strokes off of the lead.

The boys’ team failed to qualify after they finished second to Sleepy Eye for the second straight season with a score of 340.

“We were really looking for an opportunity to take the girls’ team and the boys’ team, that was our ultimate goal,” Halvorsen said.

The girls’ state squad will include a youthful group led by Section 2A tournament champion Ali Wood.

Hotzler is the only senior on the squad, which placed seventh at last year’s championships.

“We hope to have a really strong showing, we’re not looking to win the state tournament,” Halvorsen said. “If we won it would be a real upset.”

“If we moved into the top five for the teams, we would be really happy with that.”

Halvorsen said that two or three girls finishing in the top 20 and one girl in the top 10 are “a real possibility.”

Wood will use her strengths, consistency in chipping and putting, to excel at the tournament.

“I was 20th last year so hopefully I can get down into the 10th position,” Wood said.

The Rebels’ sophomore says she would need to shoot in the low 80s or high 70s both days to make a run at the title.

“Hopefully, I can pull it out sometime,” Wood said.

The Class A is today and Thursday at Pebble Creek Golf Club in Becker.