Fort McCoy was a real eye-opener

Monday was probably the most fun I’ve ever had as a reporter. Don’t get me wrong, I enjoy meeting new people and my daily duties, but visiting Fort McCoy in Wisconsin was definitely the most adventurous thing I’ve done in my time reporting. Don’t tell my mom, but there was live ammunition involved!

I wish I had thought of this idea on my own, but in my past experiences it’s been hard to get military interviews, much less visit troops during real training. No, the idea came from Lt. Col. Mike Funk, who asked how I’d continue covering the troops while they’re deployed. I replied honestly, “I hadn’t thought about it.” He encouraged me to contact a public affairs person for the Minnesota National Guard, and they seemed truly excited about having me visit Fort McCoy. 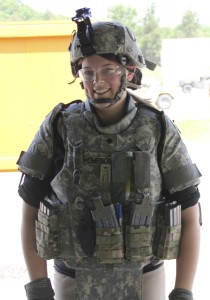 This is me wearing full protective gear, including a vest with metal plates, shrapnel-proof eyeware, gloves, ear plugs and helmet.

Maj. Paul Rickert helped form an itinerary for my day on Monday and already knew I’d want to talk to troops from the Albert Lea unit, also known as the Delta Company, 2nd Battalion, 135th Infantry Regiment, within the 34th “Red Bull” Division. I was set to arrive at 10 a.m. to get credentials before an interview with Col. Eric Kerska at 10:30 a.m.

The interview with Kerska went well, and he answered all my questions in detail. He seemed happy I wanted to continue covering hometown troops even though they are just a few hours from home. Then I met with my UPAR, or unit public affairs representative, Dustin Rockow.

Rockow, an executive officer, was my guide for the rest of the day. Driving around the fort was interesting, and it was much larger than I had imagined. First, we went to the Delta Company’s barracks where the soldiers were gathering equipment before heading out for training, and I interviewed a few soldiers.

Soon I was following the troops out to Range 29 at Fort McCoy. At first we pulled up next to some Humvees and a few buildings, which wasn’t exactly impressive. There, troops were told about their mission. Platoons went through the range separately so the soldiers who weren’t going first started to relax. A few popped open some MREs, or Meals Ready to Eat.

Capt. Steven Wayne plopped down an MRE labeled “No. 20 Spaghetti with Meat Sauce” in front of me and dared me to eat a bite of everything inside the pack. I’ll try anything once, so we started opening the various packages.

Along with the main course of spaghetti in meat sauce, there was a piece of chipotle-flavored bread, a packet of cheese sauce, a bag of spicy cheese crackers, a packet of cherry and blueberry cobbler, a bag of Skittles and a lemonade drink mix. If you’re thinking that sounds like a lot of food — it is. Adding up the calories listed on each packet brought a total of more than 1,200 — for one meal.

I did try a bite of everything, and it wasn’t too bad. I’m not sure I could eat MREs for days on end, but I’m told they’re much better than MREs of the past. The packet also contains a heating bag that can cook the food packets, and a bag of condiments, including a coffee packet, non-dairy creamer, sugar, salt, a bottle of Tobasco sauce, water-resistant matches, a napkin, a moist towlette and what was either breath mints or gum.

Soon after eating the first group was heading out to the range for crew gunnery practice. I expressed that I’d like to go along, and after asking the higher-ups, soon I was getting into gear borrowed from another soldier. To go into the range I had to wear a vest that weighed more than 40 pounds, a helmet, protective eye wear, ear plugs and gloves. I also grabbed my camera, excited about the photo opportunities.

I didn’t know what to expect heading into this range. I was with three other men following the armored Humvee on a dirt road. Soon, I saw how they were going about training. There were small house-like structures with dummies representing civilians along the roads. In the distance you could see larger buildings made to look like villages, and more civilians.

Soon there was an explosion. Enemy dummies popped up and a puff of smoke made it look like they were shooting at the soldiers. They responded by quickly shooting the targets down — with live ammunition. This happened several more times as we made our way throughout the range. Each time we stopped I jumped out and took photos — from a safe area. It was exhilarating and scary to be around actual weapons and gunfight. I don’t hunt, so I’m very unfamiliar with weapons. I didn’t actually ever feel in danger, which may be because we were following the action, so it was pretty fun.

I enjoyed getting to meet with soldiers and talk about their time at Fort McCoy and learn about their families. They all sounded confident about their training, and I hope each soldier returns home safely. I am thankful for the opportunity and for how welcoming everyone was at Fort McCoy.

Kelli Lageson is the special projects editor at the Albert Lea Tribune.