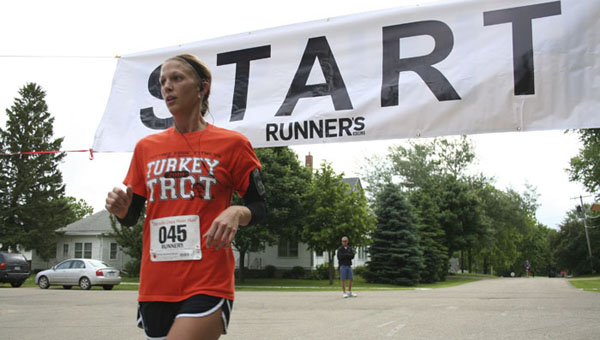 GLENVILLE – With the sun streaking its way through the early morning clouds in Glenville on Saturday, runners gathered in groups, as pairs and with strollers at hand to partake in the 5k River Run.

The River Run marked the beginning of the Saturday events for the Glenville Days celebration, which has seen improvement of the weather conditions from last year’s event, which featured rain.

This year’s run marked the second year for the local fun race. Last year the race garnered 50 participants, this year the organizers of the event say they had 50 pre-registrations as well as 20 walk-ups to the race. 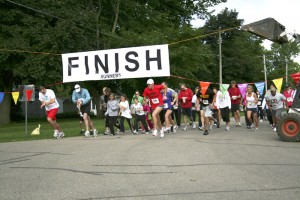 Runners begin the first mile of the 5k River Run during Glenville Days.

Albert Lea native Jeshua Erickson, 35, crossed the finish line first overall with the winning time of 19 minutes and 10 seconds. He split the first three miles with times of 5:56, 6:14 and 6:18, respectively.

Finishing second for the men was Alan Anderson, 29, of Albert Lea with a time of 19:30. Anderson usually runs other races like triathlons and half-marathons.

While on the course, camaraderie isn’t something that Anderson lacks.

“When I pass them on the way back I tell them to ‘keep it up’ or I give them a head nod or something,” Anderson said.

Third place was awarded to Corey Dieser, also of Albert Lea, in 21:30.

Victory in the women’s race was awarded to Keri Stadheim, 26, of Albert Lea. Stadheim crossed the line seventh overall in 23:58.

Perhaps the most remarkable finish of the morning was the fastest youth.

Not only was Spink the fastest youth of the event but he also traveled the farthest to get to the race. 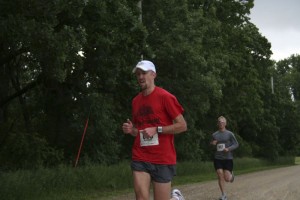 Eventual first and second place finishers, Jeshua Erickson and Alan Anderson, head down the final mile of the River Run.

Spink and his family live in Nottingshire, England. His mother, Jean, came home on their once a year trip to visit with her family who live outside of Glenville.

Jean Spink went to England for school, which is where she met her husband.

What does she enjoy so much about Glenville Days?

“The whole community getting together at one time,” Jean Spink said. “I get to see old friends since I only get back here once a year.”

Not only did the runners come from many different towns, but they also came for many different reasons. Whether it was for fitness, to train for another event or to beat the time they set last year, everyone had a separate motivation.

For Judy Jensen, 37, running in the 5k was a way to show support for the wellness program she heads at Freeborn Mower Cooperative Services.

The program promotes healthy living within the workplace, and employees have the opportunity to receive a discount on health insurance.

“I know that the biggest hurdle to a wellness program is getting management to buy-in,” Jensen added. “Which is something I haven’t had a problem with.”

Why hasn’t she had a problem with getting management involved?

CEO Jim Krueger, 40, helps out by attending 5ks. In fact, he made the River Run his third 5k event.

“(I expect) a lot of sore muscles,” Krueger said. “It is fun, for fitness and to stay in shape.”

As a community, Glennville residents come out in droves to support their local fundraiser. 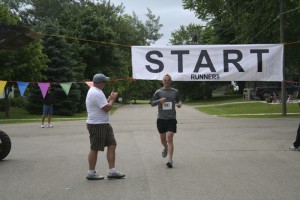 “We’ve been doing this event in its entirety since we took it over three years ago,” Sherry Heideman said. “We’re at 500 or 600 people at night at the street dances…for a community of 700 it is a pretty good size event.”

Money raised from the events will go to the Glenville Community Boosters, which provides money for community events such as the post prom event, scholarships and even picnic tables in the park.

“It’s a time to come out and be together with your family in a nice, safe and fun environment,” Heideman added.