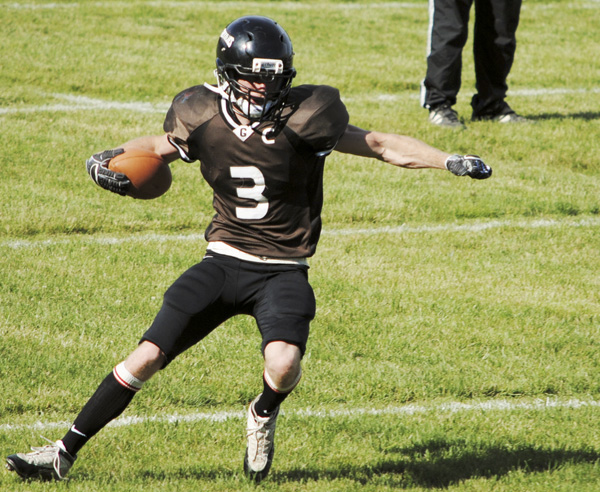 The Albert Lea Grizzlies football team won its season finale Saturday with a 44-6 romp of the Dakota Doom in Lake Benton.

Grizzlies quarterback Tony Tolbers runs away from a would-be tackler Saturday in a 44-6 win over Dakota.

With the win, the Grizzlies secured a first-place tie atop the Southern Plains Football League but lost the No. 1 seed in the playoffs in a tie-breaker to the South Central Hawgs, who beat the Grizzlies on May 21.

The Grizzlies started strong against the Doom, as Steven Salinas intercepted the first play from scrimmage, and quarterback Tony Tolbers passed to Jason Kuipers for a touchdown on the team’s first offensive play.

Tolbers added another rushing touchdown later in the first quarter and the Grizzlies entered the second with a 14-0 lead.

In the second quarter, running back Kuipers faked a reverse before throwing to a wide-open Tyler Kibbee for a 50-yard touchdown reception. As the Doom threatened to score its first points, Salinas intercepted another pass to end the half.

Tolbers threw touchdown passes to two different receivers in the third quarter and scored on his feet after E.J. Knight broke off a 70-yard run setting up the touchdown.

The Doom tacked on its only touchdown in the third before both teams struggled to find the end zone in the fourth. Tolbers finally scored his third rushing touchdown of the game with one minute remaining.

The Grizzlies play again on July 9 against the Buffalo Ridge Wildcats in Albert Lea. The winner advances to the SPFL championship game.