Grizzlies win on the road 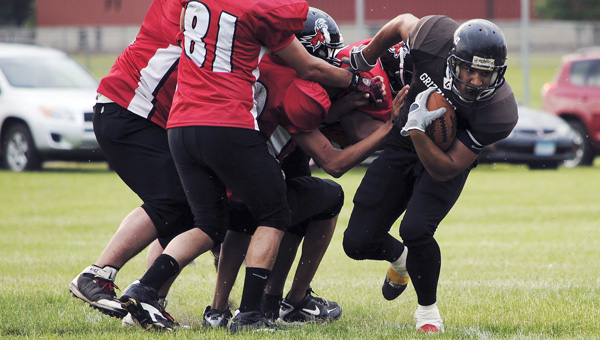 Grizzlies running back E.J. Knights breaks away from a group of would-be tacklers Saturday in Mason City, Iowa. -- Andrew Dyrdal

Tony Tolbers played a role in five of the Albert Lea Grizzlies football team’s six touchdowns Saturday in a 46-18 win at the Mason City Bucks.

Tolbers threw four passing touchdowns and scored one on the ground, and Jason Kuipers returned a kickoff for a touchdown.

“We had a great game,” Grizzlies coach Steve Piper said. “Our offense, defense and special teams all contributed.”

Piper said the Grizzlies had more fans in attendance than the home-team bucks.

“It’s always special to see our fans on the road,” he said.

Tolbers passed to Jake McClaskey for a touchdown on the game’s opening drive to go ahead 6-0.

Tolbers passed to Jared Matson for a touchdown in the second, and Kuipers scored on special teams.

In the third quarter, Tolbers threw a touchdown pass to Dustin Peterson, and E.J. Knight caught a deflected pass for the two-point conversion.

Tolbers then added a rushing touchdown, and connected with McClaskey a second time for the Grizzlies’ sixth touchdown.