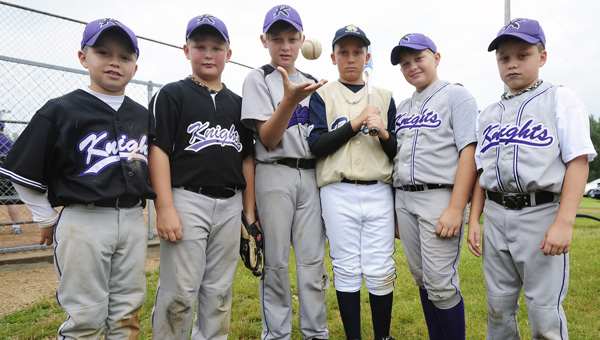 The name says it all.

The sons of Brian and John Ball, of Albert Lea, and Tom Ball, of Mason City, Iowa, took the field this weekend in the Albert Lea Knights Invitational at Snyder Field.

A total of six cousins, all boys from a family with plenty of them, cheered for each other during games and roughhoused between them — something that happens at least three times each summer.

The six Ball cousins come from a large family of mostly boys. Of 16 total cousins, 12 are boys and all are within eight years of 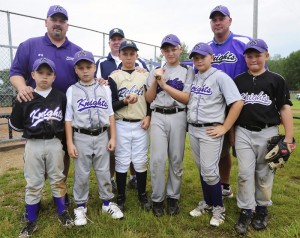 The Albert Lea Knights Invitational was a family affair for brothers, from left, back row, Brian, Tom and John, pictured here with their sons who played in the baseball tournament at Snyder Field. -- Andrew Dyrdal

“All they do is compete,” Tom said, “Whether it’s football, softball or wiffleball.”

The cousins didn’t compete against each other in the invitational because no cousin plays in another’s division. That didn’t mean they weren’t at each other’s games, though.

“They hang out, support each other and watch each other’s games,” Tom said. “They get to know each other’s teammates and meet new friends.”

The cousins play in the same tournament at least three times each summer — once in Albert Lea and twice in Mason City. Josh is the only cousin who doesn’t play for the Knights. He plays for the River City Rebels, out of Mason City.

Brian, John and Tom are three brothers out of a total of six, and each coaches their sons’ teams. All three grew up in Albert Lea and played youth baseball here, as well as varsity. Their dad, Don, of Joyce, Iowa, played town ball baseball in Lake Mills, Iowa.

John said there is a total of nine Ball cousins who play youth baseball, though all nine have never been at one tournament at the same time. The most that have ever played together is seven.

But all nine find plenty of time to hang out every year during holidays and for birthday parties. Tom said the cousins do everything together, including hunting and fishing.