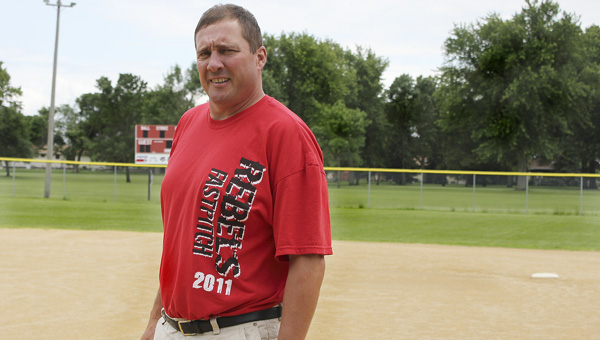 United South Central softball coach Brad Huse, above, led the Rebels to a 14-6 record in his 11th season with the team. -- Garrett Wampler/Albert Lea Tribune

WELLS — For the sixth time during his 11-year career at United South Central, Brad Huse has been named the Tribune’s All-Area Softball Coach of the Year. The award follows the Rebels’ 14-6 campaign.

Along with his record sixth Coach of the Year award, Huse reached another special milestone this season. On Thursday, May 5, the Rebels defeated Medford by a score of 9-0; the win earned Huse his 200th career victory.

“It means I’ve been at it a long time,” Huse said. “It is a tribute to all the ball players I’ve had before and all the hard work that they’ve done. The wins take care of themselves.”

Huse has been coaching for a total of 16 years, five of the years were with Blue Earth. He said each year has its own things that standout. For the 2011 season it was Ali Ramsley and Tayla Sunde.

Ramsley has been the Rebels pitcher under Huse for the past three seasons. During the 2011 season Ramsley faced 534 batters, striking out 123 of them.

Sunde was the offensive leader for USC this past season and has been a three-year varsity player for Huse. Sunde hit for .515 with 10 doubles and 23 RBIs.

“You just can’t replace them over night,” Huse said.

The squad set high goals for the 2011 season. Some were met, and some were not attained.

“We wanted to contend for the conference title but we came up a little short on that, losing to Blooming Prairie twice and we finished second in the conference,” Huse said. “We had seven seniors, and they all contributed in some way.”

Huse attributes his coaching talents to being a good judge of skill. He said he can see every players strengths and weaknesses and will never put an athlete in a position they can fail.

He also says he tries to keep a positive attitude in the clubhouse but on occasion he needs to get his point across.

“The girls know that, they know what I expect of them,” Huse said. “I think we just progressively got better each game. We took each game and built on that and had a nice little run at the end.”

The Rebels won eight of their last nine regular-season games, including five straight against conference opponents. After winning their Section 2A opening-round game over Janesville-Waldorf-Pemberton 9-4, the Rebels lost to Mankato Loyola 3-0. Loyola went on to lose in the section finals 3-2 to New Ulm Cathedral, the eventual state consolation champion.

Next year’s team is surrounded by uncertainty because of losing seven seniors. Huse hopes that the underclassmen will play enough softball this summer to be able to step into the empty positions. He recognizes that it may be a rebuilding year, but Huse won’t say what his expectations are just yet.

“I have no idea what to expect out of them,” Huse said. “I have four returning starters, and we’ll build on that.”