I took my kid fishing 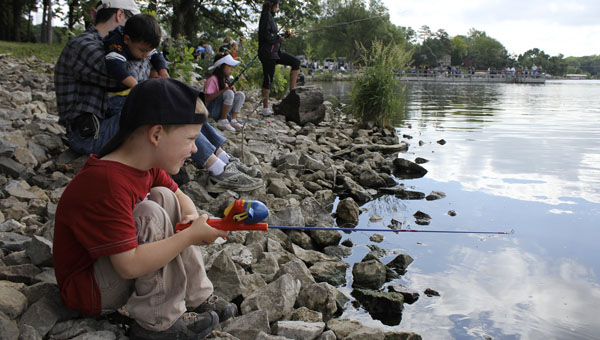 About 1,500 people showed up, and about 700 kids received fishing poles for free, said President Dave Villarreal.

My 4-year-old son, Forrest, was among them. He, my wife and I ventured to Edgewater Park and were greeted with a long line. It moved fast, and kids meanwhile were entertained by A. other kids and B. a person in a cookie suit. 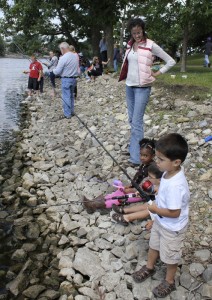 Christian Suniga, 3, stands while managing his father's pole Saturday at Edgewater Park. His little brother, Dominic, 2, holds another of his dad's poles while sitting next to a friend, Angel Parnell, 4. (By the way, these were not the boys throwing rocks mentioned in the article.) -- Tim Engstrom/Albert Lea Tribune

With a huge smile, Forrest received a Spider-Man pole and some lures. The three of us found an open spot on the shore, and I proceeded to tie the hook to the line, jab a fake worm onto the hook and connect the bobber. Before we could cast, other families joined us on each side, making our spot a bit crammed, particularly for a kid throwing his first few casts.

Still, we avoided any problems and got to know some nice folks, which is part of the fun at any event.

First, I taught Forrest to stop reeling a little before the bobber. Second, I taught him to not throw the rocks in the water. The rip-rap along the shore costs public money and, moreover, could hurt someone. Third, I taught some other boy to not throw rocks in the water. Fourth, I showed Forrest how the button works when casting. Fifth, he pushed the button well but didn’t understand that he was supposed to release it. Sixth, I showed him to release. Seventh, I ran. Eighth, he cast the line about four feet out. Ninth, that other boy’s mother told her son to stop throwing rocks.

Yes, Take a Kid Rock Throwing could be a successful fundraiser for some other club. Eventually, the boys along the shore got it that rocks scared away the fish.

I ended up doing most of the casting. Forrest did a stellar job with the reeling. Waiting and watching the bobber were the hard parts. He did attempt casting a few other times, and one of them was great, reaching about 25 feet. Not bad for a little guy with a little pole. 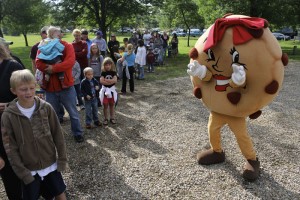 A cookie entertains kids at the back of the line. It stretched to the back of the parking lot at Edgewater Park before bending. Shown is the line after the bend. -- Tim Engstrom/Albert Lea Tribune

Eventually, we decided to switch to the minnows. I grew up on a lake in Iowa and fished as a boy. I even reeled in my first fish, a bass, on Rainy Lake in Ontario, Canada. But I hadn’t done much fishing since my teen years, except for two stream-fishing excursions — one in Washington state and one in Connecticut. Hooking a minnow should’ve been like riding a bike, but it wasn’t. Where were the best places again?

Forrest couldn’t look at Daddy hurting the little fishy, and Mommy told him it was OK because that’s what the minnows are for.

Getting a good hold on the squirmy fellow, I hooked it through the gut, brought it to the shore and cast him out into Edgewater Bay. A conversation with a man in an Iowa Hawkeyes hat minutes later revealed that the best two places to hook a minnow are through the gills or behind the head. It’s all about presentation.

I will carry this knowledge through fatherhood, for I have a feeling Forrest-Father fishing follies are in our future. I promised Forrest we would go fishing soon earlier in the morning when the fish are hungry for breakfast.

Villarreal and his wife, Kris, told me Saturday no doubt had been the best turnout for Take a Kid Fishing Day ever. They almost ran out of fishing poles and had to get some out of storage. Getting rained out in recent years had resulted in extras. Fortunately, no kid went away without a pole, as about 50 poles were left when all was done.

“This is what all the fundraising through the year is for,” Kris said.

It had been the 20th year for the event. Dave and Kris said they enjoyed seeing dads who had brought kids now bringing their grandkids.

“And there are a lot of fish stories, too,” Dave added.

Forrest, Lisa and I didn’t catch any fish, but we catch cheeseburgers at the Elbow Room afterward.