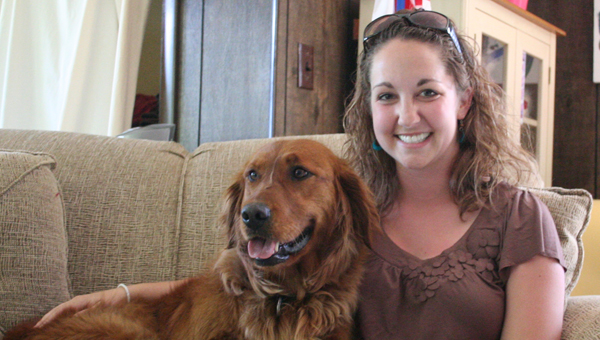 Amber Yaw poses for a photo with her dog, Lucy. Yaw was able to find Lucy with the help of social networking sites online. -- Kelli Lageson/Albert Lea Tribune

Amber Yaw likes the Internet a lot more after using it to network with other people to find her lost dog, Lucy.

Yaw, a para educator at Lakeview Elementary School in Albert Lea, first noticed Lucy was missing on May 25. She started searching but was getting worried by Friday when they hadn’t found the 4-year-old golden retriever yet.

So Yaw started putting up posters around Wells and Alden, near where Lucy had last been at Yaw’s parents’ house in Alden. At a gas station in Alden, Yaw was told a man had come in with a collar like Lucy’s and said he found a dog near the freeway.

“By Saturday I was really fed up,” Yaw said.

So she took to the Internet. First she “liked” the pages of humane societies all over Minnesota and Wisconsin. She then made a Facebook page with photos of Lucy called “Help Lucy find her way home.” Within hours of her networking someone contacted Yaw.

A woman contacted Yaw to say she saw an ad on Craigslist.com that matched Lucy’s description. So Yaw went to the ad and called the number. She finally found out that it was her dog that was found, and that Lucy was in Indiana.

“It was so stressful,” Yaw said.

Yaw said that the man who had Lucy’s collar had found her in Alden, and he took her to Rochester with him after not knowing if anyone was looking for the dog. The phone number on Lucy’s collar also didn’t work.

In Rochester, the woman from Indiana heard the story, and having golden retrievers herself, convinced him to let her keep Lucy. She then made the ad on Craigslist.com.

“I don’t think we would have found her without the Internet,” Yaw said.

Yaw’s parents, Bob and Patti, were on vacation in Missouri and picked Lucy up in Indiana on their way home. Yaw said she’s thankful to have Lucy back because she’s a sweet, loyal dog.