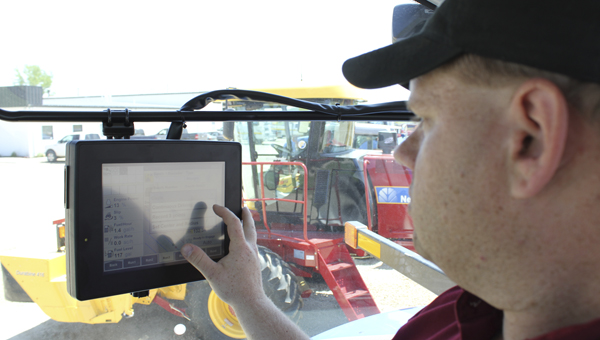 Tom Wicks punches in commands to an in-cab computer of a New Holland tractor to tell it to drive itself around the parking lot. He demonstrated it in a field behind the dealership on East Main Street also. -- Tim Engstrom/Albert Lea Tribune

Farmers know it’s hard to look forward and backward at the same time, yet that’s what they deal with whenever they drive a tractor through a field hauling a piece of implement.

No more. The latest global-positioning-system technology is alleviating that. It’s available on the tractors sold from just about any implement dealer. Tom Wicks of Titan Machinery in Albert Lea has been giving demonstrations with New Holland tractors in places such as Blooming Prairie and gave a demonstration Thursday to the Albert Lea Tribune. 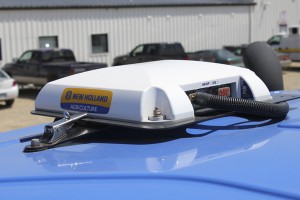 A receiver atop the roof of a blue New Holland tractor receives signals from satellites to determine positions on the ground. -- Tim Engstrom/Albert Lea Tribune

Auto-steering in one form or another has been around for 10 years, allowing the farmer to take his hand off the wheel while looking back at the planter, sprayer or whatever the tractor was pulling. The old models would be attached to the steering column and turn the steering wheel itself. About five to seven years ago, they became internal, and the capabilities of the auto steering keep advancing.

Field tractors — don’t expect GPS steering on a lawn tractor just yet; unless you want the price to jump by $15,000 or so — now come with auto-guidance as standard equipment. It’s just a matter of whether the farmer wants to use it.

“Once those guys get in it and figure out how nice it is, then they do it,” Wicks said.

Wicks said GPS allows the guidance system to remember exactly where the tractor was and turn up the field precisely on the next row. It helps to decrease overlap, stay in the same tracks if the farmer wants it, reduce farmer fatigue and even get in the field at night, which can be handy if time is of the essence.

The New Holland tractors call the auto-guidance IntelliSteer. John Deere calls it GreenStar. AGCO calls it Auto-Guide. The tractors come with a receiver on the top that is picking up signals from satellites to record positions on the ground.

It’s been a common sight in spring to see farmers with planters that had the long arms on each end that would mark where the next row began. That sight could be going by the wayside.

“If you see a farmer with the markers folded up when planting corn, you know he’s using auto steer,” Wicks said.

Steering with GPS takes some practice, and like anything, it’s good to experiment with all the capabilities that in-cab computer offers. For instance, a farmer can demonstrate for the computer how to lift the implement at the end of a row, then the computer will perform that function the same way at the end of each row at the push of a button.

The GPS computer can do straight rows, from A to B, and it can handle curves if, say, a swath needs to go around the bend of a drainage ditch.

Computers on tractors these days also record efficiency, such as gallons of fuel used per hour. Wicks said efficiency is the name of the game in farming, and auto-guidance helps.

“A tractor has to get some work done to justify itself,” he said.

Wicks said the next step in GPS ag technology will be to put receivers on planters and other implement that drags behind tractors. Farmers often plant on the sides of hills, and the implement drags low. Having the implement’s GPS drive the tractor at the right angle would result in the implement dragging straight.

“The options are unlimited with what you can do with this technology,” Wicks said.