LAKE MILLS, Iowa — The National Weather Service has issued an excessive heat advisory for several counties throughout Iowa including Winnebago County. Why? It’s going to be hot, and it’s going to be humid. 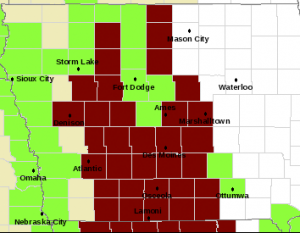 An excessive heat advisory has been issued for counties in maroon and some in green. The green counties face flood warnings.

As of noon Wednesday, Worth County, next door to the east, was not in the advisory, but the counties to the south of Hancock and Wright were and so is Kossuth to the west.

The excessive heat watch is in effect through Friday morning and warns of “very hot conditions” primarily on Thursday afternoon.

“During the afternoon hours temperatures will reach the mid- to upper 90s with dew points rising into the lower to mid-70s,” the advisory states. “Heat indexes will remain rather uncomfortable during the overnight hours, as well.”