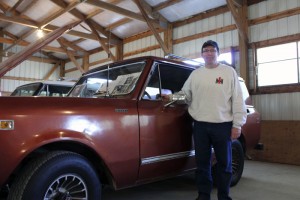 On Oct. 21, 1980, the International production plant in Fort Wayne, Ind., bid farewell to the last Scout to come off of the production line. Twenty-three years later, Mike Bolten purchased the historic vehicle in Coon Rapids, Iowa. The Scout II was originally used as a company vehicle for International before it was purchased by the family that owns the Garst Seed Company.

“I haven’t done much with it. I’ve cleaned it up a little bit and taken it to a few shows,” Bolten said. “I like to get it out to where people can see it. There are a lot of people that enjoy seeing it because it is a piece of history.” 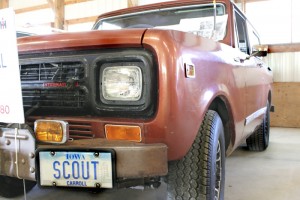 “When the 1980s versions were made, this was the first time you could buy a factory-installed turbo-charged diesel engine in an American made passenger vehicle,” said Bolten, a Glidden, Iowa, resident. “It is a milestone in itself.”

His 1980 Scout II also has a manual transmission that gives the vehicle more power, over an automatic transmission, and it is 4-wheel drive. The unique Tahitian Red Metallic color was first produced in 1979 and looks almost like a dark red and brown mixture.

Bolten said the original owners had changed out the springs and the shocks in an attempt to make it ride smoother, something he thinks made it ride worse.

They also put in a rear window defroster on it, something Bolten says he’s never seen on a Scout, and they did some pin-stripping and tinted the back windows.

“They’re a grin to drive, they’re fun, they have a real short turning radius,” Bolten said.

Bolten takes the passenger vehicle out for a drive about 10 times throughout the summer to make sure it doesn’t sit for long periods of time. He also drives his vehicle to the shows he attends, something rather unusual for a car collector.

In fact, he towed his camper with the Scout to the 2004 Roundup in Mount Pleasant, Iowa, just after he purchased the vehicle.

With the Scout being the last one produced, the makers of the car had a little fun during the manufacturing process. On the bell housing of the vehicle, the workers wrote “10-20-80 THE END.” Behind the trim on both the passenger and driver doors someone put their initials “SB” on them.

“I don’t know who they guy is,” Bolten said. “I have to meet that guy — apparently he probably put the doors or the trim on.”

Although the vehicle just passed the 59,000 mile mark on its trip to Albert Lea and it has some barbed wire rash and a few dings, Bolten doesn’t want to have it restored yet.

For now, he enjoys being able to take the Scout on little trips and let people touch the vehicle and take in its bumps, like the one Bolten himself caused on the driver side door.

“Right now, I think it is a lot of fun for a lot of people especially for the guys that really enjoy Scouts to get in this thing and take it for a spin,” Bolten said. “It’s fun for me to do that.”