The funeral service for Lawrence “Larry” K. Offenbecker, of Albert Lea, will be held at 2 p.m. on Saturday, June 11, 2011, at Christ Episcopal Church in Albert Lea. The Rev. Jim Young and Rev. Jake Loper will officiate. Interment will be in Hillcrest Cemetery. Visitation will be from 5 to 7 p.m. Friday at Bonnerup Funeral Service, and one hour before the service at the church. There will be a Masonic Service at 7 p.m. Friday at the funeral home. 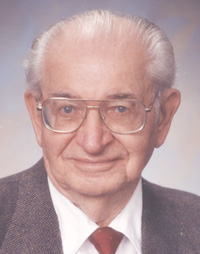 He was born on Feb. 5, 1913, in Austria-Hungary, the son of Lawrence and Magdalena (Kaufmann) Offenbecker. When he was 10 years old he came to the United States, living in Chicago until 1954, when he moved to Albert Lea.

Larry attended Northwestern University in Chicago and graduated from the University of Illinois in Champaign. He married Gladys Marks on Jan. 14, 1941, in Chicago.

Larry was very active in the Masonic Lodge. In addition to having served as master mason of the Western Star Lodge No. 26, some of the positions he held and honors he received include: past master, past high priest, past illustrious master, past president of the Osman Shrine Club, Albert Lea Chapter, grand lecturer of the Grand Chapter of Minnesota, grand master of the Grand Council, editor of the Minnesota Keystone Section, editor of the Cryptic Freemason, awarded the General Grand Council of Cryptic Masons International Medal of Honor, Grand Lodge of Minnesota and Western Star Lodge No. 26 Hiram Award and past patron of the Halcyon Chapter No. 21 Order of the Eastern Star.

He had also served as chapter chairman of SCORE (Service Corp of Retired Executives). He had nine assignments with the volunteers in Overseas Cooperative Assistance, working to achieve a world without hunger. He had traveled to Costa Rica, Bolivia, Ecuador, the Sudan, Zambia and twice to Zimbabwe and Jamaica. He was honored at the White House by President George Bush for his work with VOCA.

He was honored in the 1975-76 edition of “Community Leader and Noteworthy Americans” in recognition of past achievements and outstanding service to community and state.

He retired in 1978 from Universal Cooperatives where he was advertising manager and editor of the Universal Buyer Merchandiser.

He served on the A.L. Cuppage Foundation, Naeve Hospital Board and 15 years on the Hillcrest Cemetery Board. He was also a member of the Elks and Kiwanis.

Larry and Gladys were members of the Star Duster Dance Club and were always the first ones on the dance floor, and the last to leave. He was an avid Vikings fan, and in his younger days he loved to play golf and belonged to the Albert Lea Country Club.

He was preceded in death by his parents, and his wife, Gladys, in 1980.

He was affectionately known as Larry O. and will be remembered for his “So far so good!” and his love of martinis.