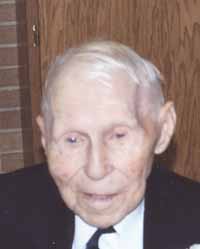 The funeral service for Leon Gerhard Sanderson of Albert Lea will be at 10:30 a.m. Wednesday at First Lutheran Church, Glenville. The Rev. Krista Stokke will officiate. Interment will be in First Lutheran Cemetery, Glenville. Visitation will be from 5 to 7 p.m. Tuesday at Bonnerup Funeral Service, Albert Lea and one hour before the service at the church.

Leon passed away peacefully at his daughter’s home in Albert Lea, on Friday June 24, 2011. He was 97 years old.

Leon was born May 6, 1914, in Freeman Township, Freeborn County, to Gilbert Andrew and Sinora (Bensen) Sanderson. He grew up in the Northwood, Iowa, and Glenville area and was baptized and confirmed into the Lutheran faith. Leon attended Northwood, Iowa, and Glenville schools. Leon married Burnette Holstad on Nov. 8, 1935, in Osage, Iowa, and was married for 75 years. He worked as a lifetime farmer and also drove bus for the Glenville school district. Leon enjoyed going to coffee with his friends down at the Office Café in Glenville. He was a member of the Eagles and enjoyed going to the Senior Center to play cards. Leon was a very generous and giving person.