Leroy Cornelius “Dutch” Van Proosdy, 77, died at his home in Austin, Monday morning, June 27, 2011. He was born near Hollandale on Jan. 2, 1934, the first of three children, to Cornelius and Necia (Penney) Van Proosdy. Following graduation from Albert Lea High School, Dutch attended Central College in Pella, Iowa. He became a professional musician in 1950 and played tuba in polka and dance bands in southern Minnesota. On Oct. 2, 1954, he married Grace Wasmoen at Grace Lutheran Church in Albert Lea with the Rev. A.R. Herbert Johnson officiating. Dutch had numerous jobs, including auto mechanics, welding, heavy machinery operator and construction. After attending drafting school in 1968, he worked for the next 24 years at Geo. A. Hormel & Co. in the mechanical division. After his retirement, he pursued interests in music, sports and a love for the outdoors, especially the joy he found at the cabin he built near Aitkin. Along with being a member of the River Oaks Golf Club, Dutch was the founder of LDGA, a league for avid golfers in the area. An active member of St. John’s Lutheran Church, he served as choir director. He was involved with the Northwestern Singers for nearly 40 years and was president of the Lions Club. He also enjoyed playing cards at the Elks and Senior Center. Dutch was a fun-loving man who enjoyed being with friends and family and looked forward to being in heaven with Jesus. 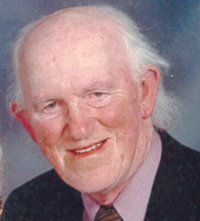 Survivors include his wife of 57 years, Grace of Austin; five children: John (Janet) of Rochester, James (Lisa) of Kansas City, Mo., Peter (Teresa) of Austin, Mary (Thomas) Franz of Bloomington, and Martha Miller of Bloomington, brothers: Kenneth Van Proosdy of Longmont, Colo., and Richard (Joyce) of Longmont, Colo.; 22 grandchildren; four great-grandchildren. He was preceded in death by his grandson, Aaron and his parents.

Funeral services will be held at 11 a.m., Friday at St. John’s Lutheran Church in Austin with the Rev. Thomas Ogilvie officiating. Friends may call from 4 to 7 p.m. Thursday at Worlein Funeral Home in Austin and at the church one hour prior to the service. Interment is at Hillcrest Cemetery, Albert Lea. Condolences may be expressed to the family online at www.worlein.com. Memorials are preferred to National Stuttering Association, 119 W. 40th St., 14th Floor, New York, NY 10018, www.nsastutter.org.