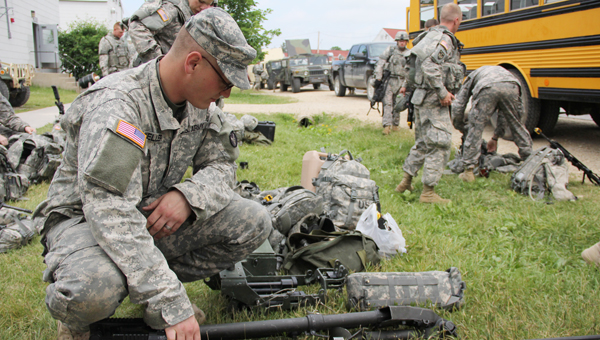 Specialist Ben Weller, of Glenville, checks over his equipment before the soldiers went to a training Monday at Fort McCoy in Wisconsin. -- Kelli Lageson/Albert Lea Tribune

FORT MCCOY, Wis. — Soldiers from the Albert Lea area are displaying advanced gunnery skills and setting themselves apart from the more than 2,400 other Minnesota National Guard soldiers training at Fort McCoy in Wisconsin.

Albert Lea’s unit — Delta Company, 2nd Battalion, 135th Infantry Regiment, within the 34th “Red Bull” Division — has been training in advanced crew gunnery and have impressed Col. Eric Kerska, who will lead the brigade on its deployment to Kuwait from mid-July until late spring in 2012. Kerska said in his many years he’s never seen perfect run-throughs at the practice ranges.

“I’ve never seen a perfect run — and they’ve had three,” Kerska said. “That’s what is setting them apart.”

While each soldier has had some training in negotiating, how to be respectful of locals and some Arabic language lessons, not all soldiers have the same training. Right now, with just weeks left before they deploy, soldiers are doing training tailored to what they’ll be doing in Kuwait and Iraq.

“They practice as close as possible to what they’ll be doing in overseas,” Kerska said.

The soldiers are completing final preparations for their yearlong deployment to one of the larger Army bases in Kuwait. Their mission, part of Operation New Dawn, is to safely escort troops and equipment out of Iraq. They will replace the 197th Fires Brigade, which is part of the New Hampshire National Guard.

“Anytime you take 2,500 people anywhere it’s dangerous,” Kerska said. “I feel we’re very well prepared for what’s ahead of us.”

Some of the first training the soldiers did was about cultural awareness. They learned some Arabic phrases and words and how to greet and negotiate respectfully. Kerska said it’s important for soldiers to know cultural etiquette to show respect and to avoid offending locals.

Kerska is the brigade commander and will lead nine battalions on the mission, three of which are from Mississippi and Oklahoma and will join the soldiers in Kuwait. Kerska said it’s unlikely the mission will be extended longer than the year allotted, but that it’s possible.

This is the second-largest deployment for the Red Bulls since World War II. Kerska said about 40 percent of the soldiers have deployed before, and for 60 percent this will be their first deployment.

The Delta Company’s specialized training includes gunnery training and how to work together as a team. On Monday, soldiers used live ammunition while traveling Range 29 at Fort McCoy.

Range 29 consists of mostly gravel and some paved roads that wind through hills. Throughout the whole range there are small house-like structures, larger buildings and dummies dressed as civilians. Because the training needs to resemble what the soldiers may experience, there are dangers as well. One part of the soldiers’ training includes discerning between enemy and civilians, and determining when it’s safe to engage the enemy.

Occasionally, enemy dummies pop up and simulate shooting at the soldiers with puffs of smoke. The soldiers’ task is to shoot the enemy dummy down before it disappears. Some of the enemy dummies are able to move, which can make the task more difficult. Soldiers are taught to think about the ramifications of shooting, including whether there are civilians or other troops behind a target.

Soldiers went on dry runs and used blank rounds, before advancing to live ammunition Monday. Soldiers are told to treat all weapons as if they are loaded, and being safe is always the biggest concern. The run-through on the range took less than 30 minutes.

Tim Mauntler, of Albert Lea, said he enjoys his job as gunman.

“Anytime I get into the turret it’s a good time,” Mauntler said. “At night it feels like a video game.”

Spc. Jordan Doyle, of Albert Lea, agreed that the platoon is getting more proficient as they’re practicing more.

“For the most part I feel prepared,” Doyle said.

After each run-through on the range, soldiers met for a debriefing. There they talked about what worked and didn’t work during the mission. It was a time to discuss what could have worked better and what they did well.

Soon these soldiers will start their Culminating Training Exercise, where they take everything they’ve learned and practice it all together. For this they’ll stay in one area of Fort McCoy instead of staying in their barracks and traveling to training areas.

Though each day at Fort McCoy is different, soldiers have settled in to life in the barracks. For Spc. Kyle Davis, 22, of Albert Lea, a normal day starts around 5:30 or 6 a.m. and ends around 10:30 or 11 p.m. This can all change with certain missions, like when his group did nighttime training at a range, which kept them up until around 3 a.m.

In the off times soldiers are able to work out, eat at the dining hall or one of the few restaurants on the fort. Soldiers also do their own laundry at laundromats throughout the fort, or they can visit the computer lab to gain Internet access.

For Davis, this is his longest stay at Fort McCoy, though he’s been there before for a two-week summer stint. He’s a gunman, which he acknowledged is dangerous but said it doesn’t bother him.

Davis said he’s missing his girlfriend and family back home and that he’s looking forward to starting the mission and getting back home. This will be his first deployment.

Sgt. Dan Springborg, 45, of Albert Lea, is in his fifth year in the Army. This will be his second deployment; his first was to Kosovo. He said he’s enjoyed getting used to working together as a group. Springborg works at the Freeborn County Jail and said he misses his family, including wife, Gail, and daughters Brittany and Courtney. He said he’s already missing “doing the dad stuff,” including helping his daughter buy a car.

Sgt. 1st Class Jeff Dahlen, 39, of Freeborn, is also leaving a wife and two daughters. His wife is Jennifer and his daughters are Sierra and Shelbie. This will be his fourth deployment, and he said it’s always difficult to leave family.

Spc. Ben Weller, of Glenville, is a gunman and explained the machine guns they were using during Monday’s training. The machine gun is a belt-fed .50-caliber model that feeds from both the left and right. Weller has received an Army Commendation Medal and a brigade trefoil pin for his shooting abilities.

Before the soldiers leave in mid-July there will be a family picnic held from 2 to 7 p.m. on July 10. The civic organization, Serving Our Troops, will serve soldiers and family members a free steak dinner. Kerska said the organization has flown overseas before to provide free steak dinners to the Minnesota National Guard troops.

“It’s really neat to see the support from back home,” Kerska said.

He said all the food and beverages are donated for the event, and that it’s nice to see people supporting the soldiers.