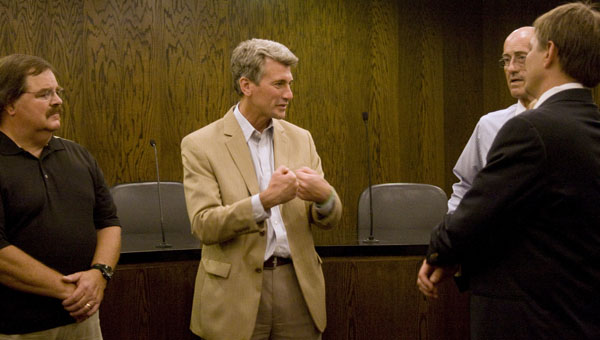 Mayors from Minneapolis, Albert Lea and Austin came together Wednesday to encourage the state Legislature and the governor to take a balanced approach to resolving the state deficit.

In a news conference in the Council Chambers at Albert Lea City Hall, they warned that deeper cuts to local government aid could cripple the state’s largest communities and significantly weaken Greater Minnesota cities.

Minneapolis Mayor R.T. Rybak said eliminating or deeply reducing LGA would cause “serious” consequences to cities in the state. He talked about the importance of continuing the long-term LGA partnership between cities and the state so that every community can have adequate basic services, including police and fire services.

“We’re not saying we shouldn’t make tough cuts, we’re just saying the bulk shouldn’t be on the backs of cities,” Rybak said.

Albert Lea Mayor Vern Rasmussen said LGA has already been attacked several times in previous legislative sessions and because of that Albert Lea has already had to make some serious cuts. He referenced cuts to the library and city pool, among many others. The number of city employees has also decreased by 10 since 2008.

Rasmussen said if some of the LGA cuts happen that have been talked about, Albert Lea could lose another eight positions.

“We have cut all of the fluff,” Rasmussen said.

Reductions in LGA would mean additional reduced services or higher property taxes, or both, the mayors said.

On the same note, Rasmussen also noted the effect LGA reductions would have on helping the city stay competitive for new developers. In being a border city along Iowa, the city is under a lot of pressure with other cities with Iowa.

“It would put the final nail in our coffin,” he said.

Rybak said it is long overdue that the Legislature compromise with the governor to find a budget solution that protects the state’s property tax payers.

“It is clear to businesses, families and local communities that a state revenue increase is better than local property-tax increases,” he said.

Rybak said mayors across the state are working together to address this issue. He was also slated to visit New Ulm Wednesday for a similar presentation.

He said mayors have also found support from several chambers of commerce, many of which have passed resolutions supporting the policy and warning that additional cuts to programs will result in higher property taxes.