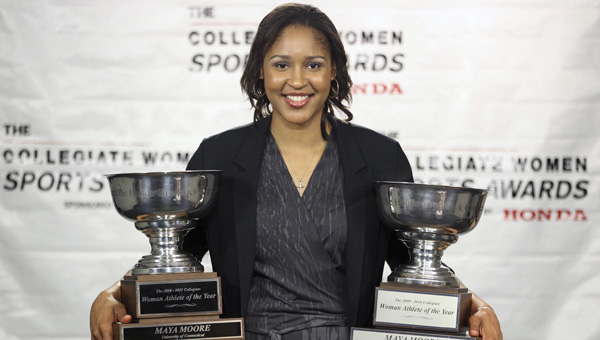 Maya Moore, above, was the No. 1 pick in the WNBA Draft by the Minnesota Lynx. -- Getty Images

Moore, the No. 1 overall draft pick of the Minnesota Lynx, joined swimmer Tracy Caulkins (1982 and ’84) as the only athletes to win the award twice.

The announcement was made Monday at Columbia University as Moore beat out fellow finalists Sheila Reid, a distance runner from Villanova, and Penn State volleyball player Blair Brown.

Moore is the fourth-leading scorer in NCAA history and helped lead the Huskies to four Final Four appearances, including two national titles.