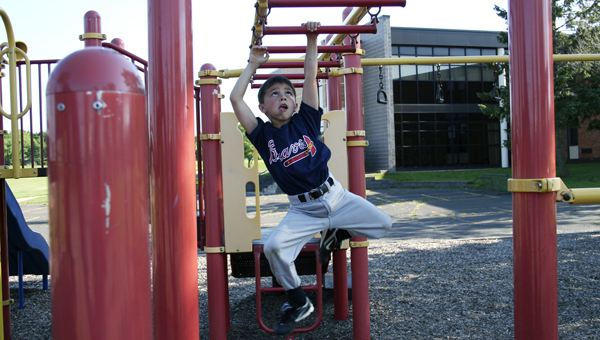 Trevor Abrego, 6, shows his mom how fast he can complete the monkey bars on the playground at Southwest Middle School, before his baseball game on Wednesday night. -- Garrett Wampler/Albert Lea Tribune

The National Weather Service has issued a heat advisory for much of the Midwest. Advisories have been issued ranging from International Falls to Joplin, Mo.

It’s that time of the summer when warm air likes to move north from the Gulf of Mexico across the central United States, making people swelter when they are outside.

“A hot and muggy air mass will move into the area today and continue into the night. The cool front will move at a slower pace across the area on Friday, which will mean that the hot and humid conditions will linger,” the advisory for southern Minnesota states.

High temperatures for southern Minnesota will be in the mid-90s, with dew points surging into the 70s. This will create a heat index value of more than 100 degrees on Thursday and Friday.

As of this morning, the heat advisory was slated to remain in effect until 8 p.m. Friday.

The Albert Lea forecast for today is sunny and hot, with a high near 93, according to the National Weather Service. It calls for a south wind between 10 and 16 mph. The high for Friday is forecast as 93 (KIMT says 88), with the same weather, except for a 20 percent chance of showers and thunderstorms that night. Saturday has a high of 86.

The Twin Cities will be under an excessive heat watch during the muggy weather.

People spending time outside should take extra precautions, the National Weather Service stated, and should reschedule strenuous activities to early morning or evening. Be aware of the signs and symptoms of heat exhaustion and heat stroke. Wear light-weight and loose-fitting clothing when possible and drink plenty of water.

To reduce risk during outdoor work, the Occupational Safety and Health Administration recommends scheduling frequent rest breaks in shaded or air-conditioned environments. Anyone overcome by heat should be moved to a cool and shaded location. Heat stroke is an emergency. Call 911.

A heat advisory means that a period of hot temperatures is expected. The combination of hot temperatures and high humidity will create a situation in which heat illnesses are possible. Drink fluids, stay in an air-conditioned room, stay out of the sun and check up on relatives and neighbors, particularly those who are vulnerable.