The Low Bucks Car Club announced the 18th Eddie Cochran print is now available. The print went on display at the drive-in social. The proceeds from the print sales helps fund the Eddie Cochran Scholarships given to Freeborn County students majoring in music or fine arts.

The prints are numbered and signed by artist, Eloise Adams. Some prints are handpainted. This year Eddie’s song “Hallelujah, I Love Her So” is the featured tune. It was Eddie’s 11th single.

Also shown is the Cochran home on Charles Street. To the left is Eddie with boyhood friends Bill Malepsy and Merle McGinnis. Below is Eddie with his Gretsch guitar. Middle left is the Low Bucks logo for the 2011 car show. Also shown is the turn-around at the North end of Broadway. Also seen is Historic Mitch’s Gas Station on Fountain St. and the A& W Root Beer Stand at South Broadway and 7th Street. At the bottom is the Central Electric Company truck, now Albert Lea Electric Company, 92 years in business now located at 1410 Olsen Drive. 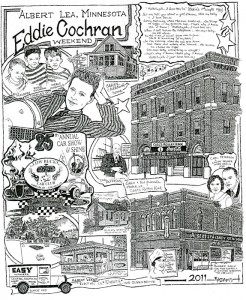 Beneath the lyrics to “Hallelujah, I Love Her So” is Carl’s Roller Rink also shown as Carl Peterson ready to rent skates to Albert Lea teens. Eddie Cochran and his friends skated here. The rink was located in what is now the Marion Ross Community Center.

Below right-corner building on Main and Broadway where Brick Furniture is now located. Located in this site was the Majestic Cleaners, the Andrews Eat Shop and Albert Lea Candy Kitchen and Barber Shop run by Fred Keppel and Dayton Greengo.

Louise Seuser was a waitress at the Candy Kitchen. One day Carl Peterson entered the Candy Kitchen and saw Louise on a ladder trying to reach something on a high shelf. Carl said “he fell in love with her legs.” They were later married in 1929. Also shown is their wedding picture. The downtown romance fits with Eddie’s tune, “Hallelujah, I Love Her So.”

The prints are available at Adam’s Original Shop located at 238 S. Broadway.