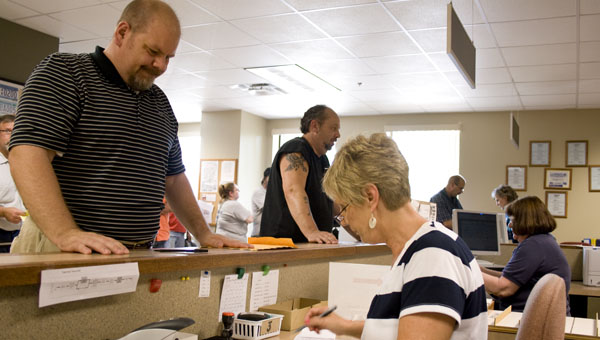 Brian Butler of Minneapolis came Thursday to the Freeborn County License Center to renew a title while in town for business. Butler said he had heard license centers would be closed under a potential government shutdown, so he hurried in to avoid any delays. He found out the license center in Freeborn County will not be closing as it is county-operated. -- Sarah Stultz/Albert Lea Tribune

With ideas that all license centers across the state would be closed in the event of a government shutdown, residents flooded the Freeborn County License Center Thursday to get up-to-date on their documentation.

When they arrived at the Freeborn County facility, they found out otherwise.

Freeborn County’s license center will actually not be closing because it is county-operated, said Sue Wagoner, supervisor in the Freeborn County Deputy Registrar’s Office.

Driver exams, either the written or road test, however, will not be conducted, along with other tasks handled by the state motor vehicle employees, including suspension and revocation fees and driver records.

So what will still be available?

Wagoner said the license center will be open for people wishing to renew their driver’s licenses or tabs or to get new license plates — until supplies run out, that is.

Minnesota Workforce Development Inc. closed the doors of its workforce center in Albert Lea Thursday in anticipation of a state government shutdown.

Employees placed a sign on the door at about 4:30 p.m., advising people of the closure. At this point, the facility is expected to be closed at least Friday and all of next week.

People are being directed to www.BeReadyMN.org.