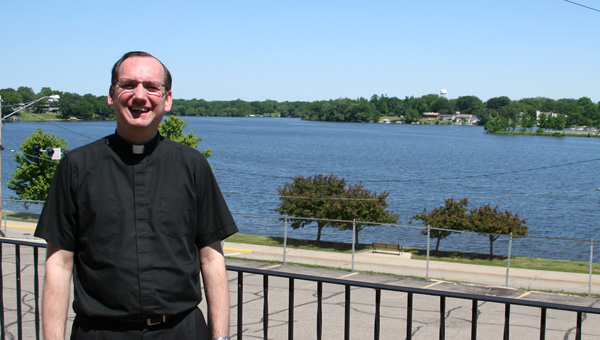 The Rev. Jim Berning stands outside St. Theodore Catholic Church. He said he’ll miss his view of the lake when he moves to Winona. -- Kelli Lageson/Albert Lea Tribune

Soon Albert Lea and Twin Lakes’ parishes will have a new priest as the Rev. Jim Berning will be moving to Winona.

“I’m looking forward to it — it’s another part of my journey,” Berning said.

On June 12 there was a reception for Berning at St. Theodore, and more than 300 people showed up to wish him well with his new assignment. Berning said the new priest at St. Theodore’s parish will be the Rev. Tim Reker, who will start on July 1.

“I’ve enjoyed reaching out to the people,” Berning said.

Berning said he’s most proud of seeing more Hispanics come to the church with the addition of a mass in Spanish. Though St. Mary’s parish in Winona has fewer members, there are five parishes total in Winona. There is also Catholic schooling available for preschoolers through 12th-graders. Berning said he’ll be involved in the schools there with other pastors and said he’ll miss St. Theodore Catholic School, its students and staff.

“It’s been a team effort to run the school,” Berning said.

Berning said he’ll miss the spirit of welcoming in the Albert Lea area, and he’ll miss his view of the lake. He’ll miss the parishioners, and he said he’s worked hard to get to know everyone’s names. Berning has also enjoyed working with the Knights of Columbus and organizing mission trips to Pine Ridge, S.D., to minister to American Indians.

St. Mary’s in Winona will celebrate its 100th anniversary in August, and Berning said he’s looking forward to being part of the celebration.