Rare tractors at the Roundup 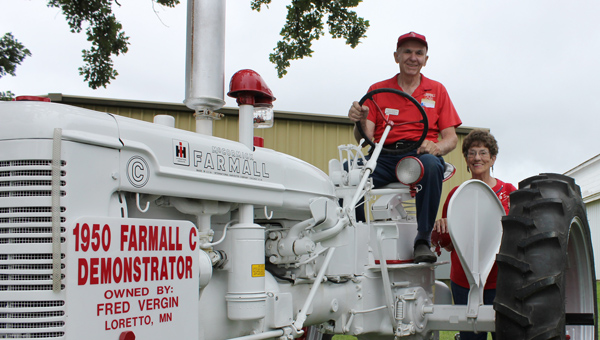 Fred and Rita Vergin, of Loretto, pose for a photo by their 1950 Farmall C, a white demonstrator tractor. The tractor, along with two others owned by the Vergins are on display across from the Fairlane Building at the Freeborn County Fairgrounds as part of the Red Power Roundup. -- Kelli Lageson/Albert Lea Tribune

Fred and Rita Vergin of Loretto, northwest of the Twin Cities, understand the difficulties of finding white Farmall demonstrator tractors to purchase. They own all three models that were produced in 1950.

These tractors are rare. So rare, that the Vergins have never met another person that owns the models including the Farmall C, Farmall Cub and the Farmall Super A. 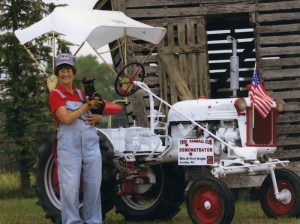 Rita Vergin poses for a photo next to her white demonstrator 1950 Farmall Cub. The tractor can be seen across from the Fairlane Building at the Red Power Roundup at the Freeborn County Fairgrounds. -- Submitted photo

“I’ve gone around shows, and I’ve seen very few of them,” Fred Vergin said. “They’re very hard to find. The Super A is the most rare.”

For the first three months of production of the 1950s models, International, the producer of the Farmall brand, created only white demonstrator tractors.

These machines were to be distributed to every dealer for them to loan out to customers. If the customers liked the tractor, maybe they would return to purchase it.

The purpose of the white demonstrators was to market the products to farmers.

“The dealers were supposed to repaint them red when they sold them,” Fred Vergin said.

That is the way Vergin found his Farmall C more than 10 years ago. The red paint was falling off of the farm implement, revealing the white paint. Vergin said it was about half red and half white. 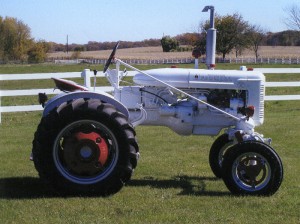 The Vergin's 1950 Farmall Super A is a rare white demonstrator tractor. It can be seen across from the Fairlane Building at the Freeborn County Fairgrounds. -- Submitted photo

There have been two other factory-built color modifications under the brand. The first is a Highway Yellow color, which was normally used to designate local municipalities. Demonstrator Gold was the other color. This paint scheme was used when International produced demonstrators in 1970.

Vergin said that a combination of being white and being rare are what make his demonstrators special to him. He added that he thinks the gold demonstrators are nice, but they don’t seem to be as popular as his white counterparts.

The couple brought all three of their tractors with them to the Roundup but currently the Super A is undergoing issues with its battery. He hopes the issue will be resolved before the Red Power Roundup is fully underway.

This isn’t the first show that they have taken their unique collection to. The Vergins try to attend five or six shows a year.

Tractor shows like the Roundup are where Vergin learned about Chapter 15 of the International Harvester Collectors Club, hosts of this year’s event. He’s been a member for nine or 10 years.

“I grew up on a farm and we had tractors, they were a little bigger than these, we went to shows,” Fred Vergin said. “I started talking with them and here I am.”

Vergin has attended four other Roundups, the farthest away was in Madison, S.D. He hasn’t decided if he will drive his tractors around yet.

“I might go in the parade with them,” Fred Vergin said. “I’m registered so I can if I want.”

Wherever the next show is there is one thing you can count on, Fred Vergin dislikes how dirty the white tractors get.

“They’re a lot harder than the red ones to keep clean,” Vergin said. “A little dew at night and dust just makes them dirty, I have to wipe them down every morning.”