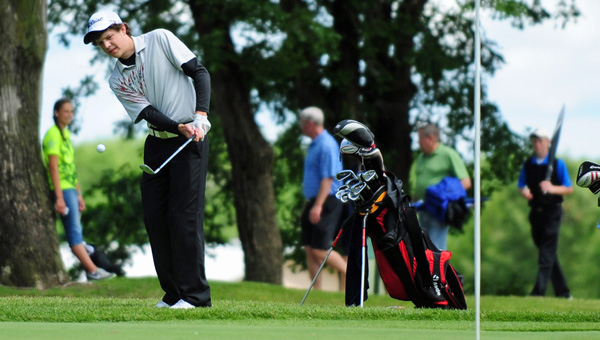 United South Central senior golfer Sam Gackstetter chips onto the ninth green Wednesday at Pebble Creek Golf Club in Becker. Gackstetter bogeyed the hole for a 79 and finished the round in 12th place overall. -- Andrew Dyrdal

Sam Gackstetter is in 12th place

BECKER — A triple bogey and missed one-foot putt is all that kept United South Central boys’ golfer Sam Gackstetter from finishing in the top five Wednesday after the first round of the Class A state golf tournament at Pebble Creek Golf Club in Becker.

Gackstetter shot a four-over 40 on the back nine despite triple bogeying Hole 14 and followed it with a three-over 39 on the front. Gackstetter was set up to par Hole 9 — his round’s final hole — but missed a one-foot putt. He disappointingly walked off the green with a 79 for the round — good for 12th place.

“I’ll take it for state golf,” Gackstetter said of his round. “It was so-so. I’ve had better rounds.”

The lone Rebels boys’ golfer to qualify for state teed off on Hole 10 at 9:51 a.m. following a one-hour rain delay. Gackstetter was four-over through the first four holes but parred the final five holes.

Gackstetter parred five of the first six holes on the front nine, and six total, before sandwiching a par between bogeys on No. 8 and 9.

Gackstetter said he hit his irons well and that the wet greens and fairways affected him on some holes but not on others. He said his goal for Round 2 is to shoot in the mid-70s and move into the top five.

Girls’ team in 6th after Day 1

The Rebels girls’ team finished in sixth place after Round 1 at the Class A state girls’ golf tournament at Pebble Creek Golf Course in Becker.

Ali Wood and ninth-grader Claire Christian tied for 19th individually and led the Rebels with a pair of 91s.

Kyley Bullerman (98) and Erinn Hotlzer (103) rounded off the Rebels scoring, and Jenna Stevermer (110) and Veronica Shindler (120) were non-scorers.

Lewiston-Altura was atop the leaderboard with a 330.

The girls’ tournament was delayed once due to rain, and Wood, a sophomore who teed off at last for the Rebels at 2:30 p.m., finished just before dark.

After the first round, the Rebels trailed fifth-place Lincoln HI by three strokes and Osakis by 10. The Rebels finished seventh at state last season.