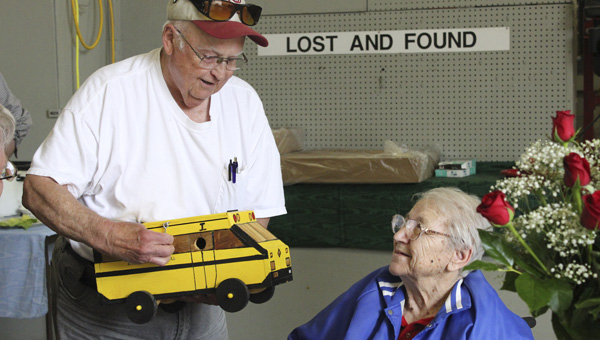 She would rise from her bed to make it out of the house by 6 a.m. 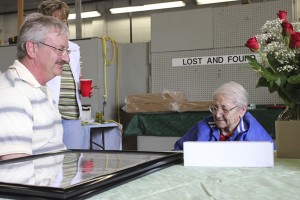 From her home, Nelson traveled down to the Albert Lea Bus Company to make sure her yellow machine was suitable for kids to travel in during the day.

The wheels on the bus would hit the pavement to safely deliver her Southwest Middle School students to school in time for class.

Remarkably, she did this for 47 years. Thursday marked her official retirement party after her hips removed her from behind the wheel in December.

Nelson was hugged and greeted by her fellow bus drivers as she arrived at the bus company, surprised that the event wasn’t just to celebrate the end of the school year as she had expected.

“She’s great — a great driver and a great employee,” Richard Polley, manager of the Albert Lea Bus Company said. “I’ve been here 30 of those 47 years so I know her pretty well. Her safety records are great and she was here every day.” 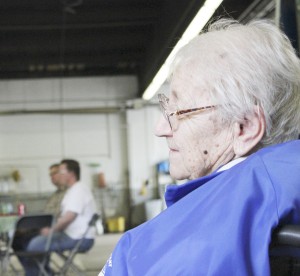 Nelson looks on as her fellow friends and co-workers celebrate the end of the school year and her retirement. -- Garrett Wampler/ Albert Lea Tribune

During her tenure she may have delivered multiple generations of Albert Lea families to school, but nothing will ever change her passion for seeing the smiling kids faces first thing in the morning.

“I like kids and it was always something good to get up for in the morning to see a bunch of smiling faces,” Nelson said. “Hopefully, they all had a good day.”

The camaraderie shared at the company is what Nelson said was the best part of her career.

After 47 years at one business it comes down to the people you are surrounded by.

“It was the people, absolutely the people and the kids,” Nelson said. “No one stands out, but they’re all pretty special.”

Nelson first started driving buses after her neighbor told her it would be a good idea.

“I said not until my son was in school all day long,” Nelson insisted. “When he started first grade I came down.”

“I would drive here and then I would go help my dad and come back again in the afternoon.”

Her remarkable tenure spanned 10 Minnesota governors and nine different presidential administrations dating back to when President Lyndon B. Johnson was in office. Something Nelson says is “unbelievable.”

As the celebration continued jokes of not having to wake up in negative 30-degree weather or dealing with screaming kids ensued. There wasn’t one exciting story that Nelson could pin-point but she said, “There’s a lot of them.”

In retirement Nelson says she hopes to be able to get around better with her hips.

“She’s a great all-around person, we loved having her around,” Polley said.

What’s the key to success on making it through 47 years?

“It’s just the good people that I worked with and I really enjoyed it,” Nelson said.