Memorial services for Robert John Frydenlund, 90, of Albert Lea, will be held at 10:30 a.m. Thursday at First Lutheran Church. The Rev. Daniel Baker will officiate. Interment will be in the Hayward Cemetery. Military honors will be accorded by area servicemen’s organizations. Visitation will be from 5 to 7 p.m. Wednesday at the Bayview/Freeborn Funeral Home, and one hour prior to the service at the church on Thursday. To sign the guestbook, go to www.bayviewfuneral.com. 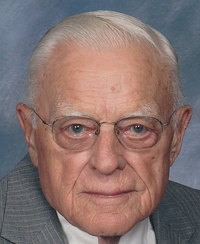 Robert John Frydenlund was born on Nov. 3, 1920, in Hayward Township, the son of John and Hildegarde (Magelssen) Frydenlund. He grew up in the Hayward area and graduated from Albert Lea High School in 1938. Robert was inducted into the armed forces in October of 1942. He served with the Army Airforce Transport Command as an aircraft instrument specialist and was stationed in India. On Nov. 10, 1946, Robert was united in marriage to Marion Jean Arneson at East Freeborn Lutheran Church. Robert worked for Olson Motors as a service manager, mechanic and car salesman. He also worked for Big A Auto Parts as an auto parts salesman. Robert was a member of First Lutheran Church, the VFW and the American Legion. He enjoyed playing baseball in his younger years, watching the Minnesota Twins and Minnesota Vikings, gardening and working on his lawn mowers and tractors.