Robins need 2 to 6 days to build a nest

“Everything is nearly copacetic. Money is covered with germs. That’s why I’m so healthy. I’m looking for a part-time job because I don’t pay enough taxes. What’s the point of tightening my belt when I’m still making payments on my pants? My nephew Gopher is staying at my place. His father works in the delivery department down at the fertilizer plant. He named both of Gopher’s twin brothers ‘Ed.’ He believes that two Eds are better than one. Gopher was named after the Minnesota Gophers. That’s why kids keep stealing his lunch money. He may be a Gopher, but he eats like a horse. He eats instead of learning. He could push his brain through a Life Savers without getting any mint on it. He got all Zs on his report card. He fell asleep in every class.”

“I just noticed that you are wearing your glasses, Crandall,” I say.

“It’s because of my neighbor Still Bill’s idiotic dog. Still Bill keeps his wallet on a chain and lets his dog run free. His mutt poops all over my lawn. I’ve stepped in excrement too many times.”

“What does that have to do with you wearing glasses?” I ask.

“I can’t see crap without my glasses.”

A wind knocked down branches. I checked out a fallen robin’s nest. It was empty. A robin takes two to six days to build the nest, using mud mixed with grass or small twigs. She uses her bill, feet and body to mold the nest into a cup shape and lines it with grass. The robin incubates the eggs for 12 to 14 days and the young birds spend 13 to 16 days in the nest.

North Dakota’s motto is, “Strength from the soil.” The state ranks first of all states in production of flaxseed, canola, dry peas, barley, dry beans, lentils, oats, hard red spring wheat, durum and honey. Unemployment is so low that some experts claim it has the best job market in the country and the best fiscal situation of all the states. Energy development is the reason. North Dakota is fourth in oil production behind Texas, Alaska and California.

I spoke in Carrington recently at the delightful Potholes & Prairie Birding Festival. Carrington is a fine place for endeavors of all kinds. I visited Dawson, a small city with an air quality of 99 out of 100. My bride told me to breathe deeply while there.

I searched for furtive Baird’s sparrows and Sprague’s pipits. A pipit delights me with its airborne singing. Godwits landed in the middle of the road to scold me. I took a birding bus to Chase Lake, a spot that has hosted as many as 35,000 American white pelicans. I’d love to race a duck with a bus every day. There were so many birds that the driver maintained a closed-door policy on the parked bus in order to keep the barn swallows outside. I walked with folks across prairies. We moved in a single file to lessen our environmental impact. We walked to the birds because they wouldn’t walk to us. 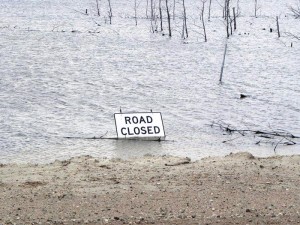 I visited Devils Lake, a gigantic lake that has expanded enough the last 20 years to swallow 164,000 acres of farmland. The impetuous lake caused roads to disappear and instigated buyouts of two towns (Penn and Churchs Ferry). Devils Lake is part of what was Lake Agassiz, a glacial lake larger than the five Great Lakes combined. Since 1992, Devils Lake has risen more than 29 feet and has grown from 69 square miles to 285.

I drove alongside Devils Lake on soft roads that were under water in spots. Wind-driven lake water splashed my windshield. A football field had become part of the lake. Fishing boats rode waves that had once been waves of grain. I talked to a farmer as we watched boats bounce on Devils Lake. Some call it the “Perch Capital of the World.” The farmer called it other things. He told me that the spreading lake had left him with only a third of his farm remaining as dry land. He continues to pay taxes on the underwater farmland.

“How do I tell a red fox from a gray fox?” Red foxes favor cultivated fields, meadows, brushy fence lines, woody riparian regions and shrubby places. Red foxes resemble small, slender dogs. Fox size is generally overestimated because the fur masks a slight bone structure. Red foxes are red with the face, top of head, and neck showing yellow or orange. The tail is reddish-black and has a white tip. The sides of the ears, lower legs and feet are dark, while the chest, belly and insides of the ears are creamy white. Gray foxes prefer brushy or forested habitats, are skilled tree climbers and are more aggressive than red foxes. The gray fox is confused with the red fox because the gray has rusty-red fur on its ears and neck. It is gray with the darkest color extending along the back to the end of the tail. The belly, throat and chest are whitish. A gray fox appears smaller than a red fox due to shorter legs and stockier body. Compared to red foxes, grays have shorter muzzles and shorter ears.

MIT’s Media Lab is working on a toothpaste dispenser/weather forecaster. It squeezes out a flavor based on the day’s forecast. Mint for colder and cinnamon for hotter. Blue stripes predict rain.

If all the young survived, one female cottontail rabbit could have 35,000 descendants in just five years.

There are many collective nouns for birds. Not all are in common use. An asylum of loons, a whiteness of swans and a congress of crows.

“There is a flower for every mood in the mind.” — Henry David Thoreau

“The future is something which everyone reaches at the rate of 60 minutes an hour, whatever he does, whoever he is.” — C. S. Lewis